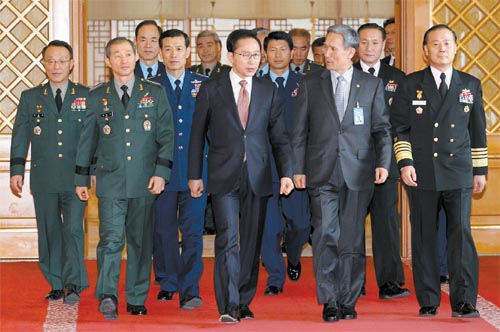 
The military completed the reshuffle of its top brass yesterday in an attempt to quell public criticism over the country’s poor readiness against a North Korean attack.

As part of the shake-up, the Ministry of National Defense named the country’s first female combatant general, promoting Army Col. Song Myung-soon to brigadier general. While the country has had five female generals, all were from the nurse corps.

The deputy chairman of the Joint Chiefs of Staff and the head of the Special Warfare Command were replaced yesterday in the first major reshuffle under the leadership of new Defense Minister Kim Kwan-jin.

According to the ministry, 75 Army, 14 Navy and 22 Air Force officers were promoted. “Servicemen who have the true military spirit, reform-mind, driving force and capabilities to carry out joint operations and manage a crisis were appointed to key posts in the military this time,” said the Ministry of National Defense in its statement. “In order to break down the long-held bureaucratic tradition in the military, field operations veterans with strong combat will were promoted.” 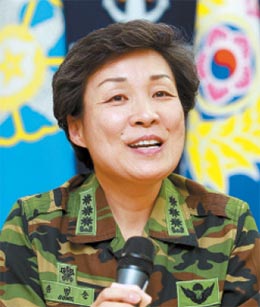 Song, 52, who will be the first female combatant general, is currently working in the joint civilian operations department at the Joint Chiefs of Staff. She was commissioned into the Women’s Army Corps in 1981 after graduating from Yeungnam University with a degree in political science and foreign affairs. She also obtained a master’s degree in national security strategy at Kyonggi University.

According to the ministry, Song has served as a special forces commander and a battalion commander in the Women’s Army Corps.

The inauguration ceremony for the new Army chief of staff also took place yesterday. Gen. Kim Sang-ki was named to the post Wednesday following the abrupt resignation of his predecessor on Tuesday over a corruption allegation.

Kim vowed to create “strong combat units by simplifying operations of the armed forces.” Defense Minister Kim hosted the event and all attendants wore combat uniforms, a change from the past practice of wearing dress uniforms.

A group of 14 newly appointed officers, including the new Army chief of staff, also reported to President Lee Myung-bak yesterday. “The defense minister conducted the fairest reshuffle of the military by reflecting the determination to build a true military,” Lee was quoted as saying by Hong Sang-pyo, senior presidential secretary for public affairs. “When you command your units, promote or punish your men, you must respect the true military spirit. You must unite with the new defense minister at the center to restore the public trust and love in the military.”

The country’s military has faced severe public criticism for its poor readiness after two deadly North Korean attacks this year. Kim Kwan-jin, former chairman of the Joint Chiefs of Staff with a nearly 40-year career in the Army, was named the new defense minister at the end of last month.