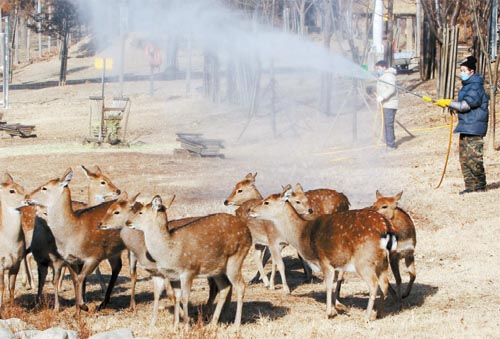 Officials at the Seoul Forest’s eco-park in Seongdong District, central Seoul, carry out disinfection work on deer as a preventive measure against the highly contagious foot-and-mouth disease (FMD). The relentless virus has spread beyond its origin in Andong, North Gyeongsang, to near the Seoul metropolitan area, as a cattle farm in Paju, Gyeonggi, was confirmed to have FMD yesterday and two hog farms in Yangju and Yeoncheon, Gyeonggi, tested positive Wednesday. The number of cloven-hoofed animals to be slaughtered has surpassed 170,000. [YONHAP]