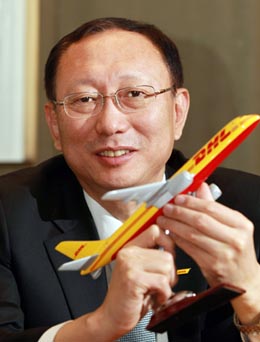 Being the perennial No. 1 company of an industry has its perks, but it also has its pitfalls. Han Byung-koo, who became CEO of DHL Express Korea in July, says he sees the challenge as combining enthusiasm with a pragmatic attitude to stay fresh.

“Now I feel as if I’m getting a handle on what direction to lead the company,” Han told the Korea JoongAng Daily this week. “As most employees have been here much longer, the last five months have been spent visiting service centers nationwide and listening to what they have to say.”

Han, who previously worked as chief financial officer at DHL, is a trained accountant and worked at the local branches of foreign multinationals, such as Goodyear, before joining DHL.

“Finance remains constant no matter where you work. And because of the influence my time at Goodyear had on me, our 390 delivery trucks may have the best front wheels in the industry now,” Han says with a smile.

DHL Express Korea, which is owned by Deutsche Post, has been the local leader in international express delivery for 33 years. It has a market share of 34 percent as it competes against FedEx, UPS and TNT.

DHL can boast of an exceptionally low employee turnover rate, but this stability also threatens to create a staid environment.

“Because 45 percent of employees have worked here 10 years or more, it doesn’t draw much attention here. Although it is a positive thing, a recent large batch of new employees found it hard to assimilate and some left the company this year.”

Han launched a “We are DHL” event to instill a sense of the company’s history and common identity.

DHL has created a reputation for cultural sponsorships.

“DHL Express Korea plans to sponsor the Leipzig Gewandhaus Orchestra to visit Korea for a performance - and by sponsor, I mean we carry all their heavy instruments by plane here among other things.”

DHL Express’ international sponsorship of Formula One and Fashion Week entails the same service - transporting racing cars or clothing for the events. “Marketing campaigns are good since displaying our ads on TV or the Web not only gets the word out but is also a boost for employee morale.”