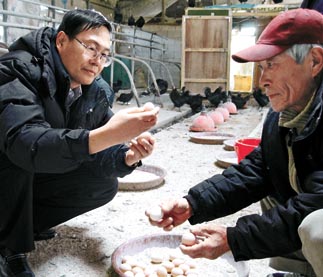 Jung Chang-duck, left, professor at Korea University, examines eggs on Dec. 9 at a homeless shelter that he started in Yangpyeong, Gyeonggi. By Han Eun-wha

A computer engineering professor who hovered between life and death after he was diagnosed with leukemia 14 years ago is giving back to homeless people who have nowhere else to go.

In 2000, Jung Chang-duck, professor in the department of computer science and information at Korea University, used his 1 billion won ($867,336) in savings to buy a closed school building and created a homeless shelter to help residents reconnect with families and get them back into society.

The center now looks after 135 people.

On the afternoon of Dec. 9, when a 63-year-old homeless man surnamed Yoon went inside a vinyl chicken pen near the shelter to feed them, he was quickly surrounded and warmly welcomed by the chickens who had been anxiously waiting their food.

Yoon skillfully checked the temperature and humidity inside the vinyl house and gently fed them. Just several years ago, Yoon was one of the homeless people wandering around Seoul Station asking for money and food from passersby.

“I wake up at 4 a.m. and I take care of 100 chickens full-time,” Yoon said. “My life has completely changed after I met Professor Jung. He inspired me to have a dream of standing on my own feet and reuniting with my family in the future.”

Jung, who currently heads the Korea Ubiquitous Society, attributes his plan to help the homeless after going to see a doctor for what he thought was influenza.

Jung, 50, was shocked after he was diagnosed with leukemia 14 years ago. His doctor told him that he would live only three months.

He was only 36 years old and learned about his disease in the same year he was appointed a computer information professor.

He took two years off from his teaching position to fight against acute leukemia. He received transfusions of platelets daily.

Jung said his tearful fight against the disease brought him to a life-changing turning point.

“I came to think I became a successful man not because I’m a distinguished person,” Jung said. “I then thought I was able to come all this way because I benefited from the numerous help of relatives and neighbors.”

Jung, who was the fourth of seven children in his family, carved out an uneasy life after his father passed away when he was a sixth-grader.

Jung recalled that he managed to obtain a doctorate degree from Kaist thanks to the support he received from his neighbors and relatives.

After Jung managed to fully recover, he began to learn about the struggles of homeless people. In 1998, he started off a three-day and four-night camp for the homeless in Yangpyeong, Gyeonggi.

Jung persuaded 70 homeless people about the need to value their lives by telling them about his recovery. Jung’s wife, Kim Hye-rin, also has helped with her husband’s work.

“I never had received so many complaints in my entire life,” Jung said.

Jung’s shelter was officially recognized last year for its work, and he receives subsidies for the shelter’s staff. Jung hopes to get more donations from other charities or the metropolitan government.

Jung stays at the shelter twice a week.

“My dream is to expand this shelter and create a town for homeless people,” Jung said.