Fans act out their fantasies as characters on the Net

Fans act out their fantasies as characters on the Net 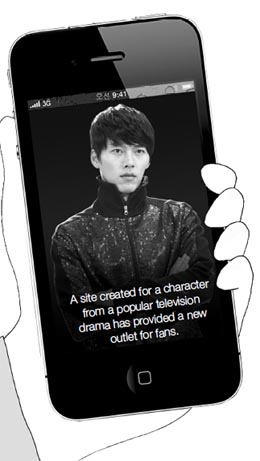 Kim Joo-won is a successful 33-year-old department store CEO who comes from a wealthy family. His Twitter profile says that he speaks five languages and his photo shows he is handsome and well-dressed. In short, he has a profile many women would die for.

The only problem is that he is not a real person.

Kim is, in fact, the leading man on the successful SBS drama “Secret Garden,” which centers on the character - played by Hyun Bin - and his romance with a poor, yet confident stunt woman named Gil Ra-im (Ha Ji-won). The show has been extremely popular, with viewer ratings of more than 30 percent.

And the fact that Kim is just a character in a television show hasn’t stopped thousands of people from subscribing to the account.

But it’s not the only account of its kind. Other pages created by fans in the names of their favorite characters have appeared over the last month, providing a new outlet for fans of shows like “Secret Garden.”

Kim’s Twitter account, @CEO_KimJooWon, was created by an anonymous fan and the messages are a combination of real dialogue from the show’s script and messages created by the account operator.

When one follower asked Kim how he defined love, the account operator, writing as Kim, said: “To me love, is just an obstacle to a M&A business [marriage of convenience].”

The response was perfectly in step with the character, who is known as a “chadonam,” a Korean acronym for “cold city man.” For many fans, it’s that air of aloofness that is his charm.

The Twitter account first appeared on Dec. 4, and has generated an enormous response from fans. Ten days later, more than 6,000 users had become followers of the account. The page still continues to attract hundreds of subscribers every day.

The account’s creator said in a recent interview with the JoongAng Ilbo that the popularity of the site was unexpected.

“I enjoy watching ‘Secret Garden’ and started the account for fun, but I was surprised that so many people became subscribers in such a short time,” said the account operator, who wished to remain anonymous. “But I think it was possible because Kim Joo-won has such unique personality and way of expressing himself.”

The creator is a college senior majoring in linguistics and economics who says he is nothing like the character he writes for on Twitter.

But he is popular nevertheless - or at least his alter ego is. He said he sometimes receives a hundred replies in an hour, which can be disruptive to his own work, yet he said he maintains the account so it doesn’t lose its popularity.

Some have speculated that the account holder is paid to operate the site by the television show’s producers - an allegation he has firmly denied.

“There is no commercial motive behind the site,” he said. “And it is only a temporary thing.”

He said that he started attracting subscribers when he joined a “Secret Garden” group on Twitter. He said he would leave messages in the character’s name and likeness - and fans reacted.

He also said he sent messages to people on “Secret Garden” fan sites, asking why they like him. That also drew a big response.

The messages posted to the site have been re-posted hundreds of times, which helped the fake Kim gain new followers. But not everyone is happy about the fan site.

There have been a number of recent cases involving impersonating celebrities on Twitter, including Lee Min-ho, Jeong Il-woo, Jang Geun-suk, Rain and Shin Min-ah. Sites like these have not only confused fans but have drawn the ire of the celebrities’ management companies.

Hyun Bin’s management company initially asked the operator of the Kim Joo-won page to shut it down, but objections from subscribers ultimately helped keep it alive.

The operator said he was allowed to keep the account in part because of a disclaimer that says it is not an official site and is therefore unrelated to the show or its producers.

Since then, a number of similar accounts have been created by fans for other characters on the show, including Gil Ra-im (@Act_GilRaim) and Kim Joo-won’s cousin Oska (@Star_Oska).

Copycat sites have been created by fans of other characters as well.

Despite the amount of work it has taken to maintain the site, the account operator said he will continue with the site for now.

“I enjoy making up replies based on the personality of the character or lines from the show,” he said. “I don’t mean any harm to Hyun Bin at all and hope he continues his good acting.”

He also had a few words of gratitude for the show’s writers, who provide the inspiration and material he posts for the character on Twitter.

“Every line is exquisite,” he said.