For Korea and Asean, China is now topic No. 1

For Korea and Asean, China is now topic No. 1 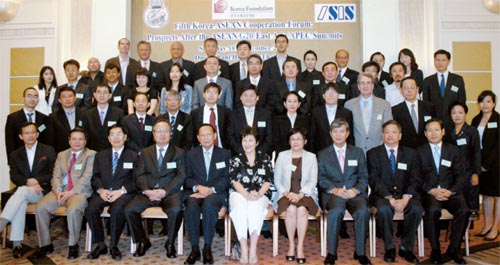 
HUA HIN, Thailand - China dominated the agenda at the Korea-Asean Cooperation Forum, with main topics at an academic exchange between including China’s growing dominance in Asia and ways to recalibrate the regional political balance to accommodate the emerging China-U.S. rivalry.

The 5th Korea-Asean Cooperation Forum was held in the resort city of Hua Hin, Thailand, Saturday, with approximately 30 participants - comprised of scholars, government officials and journalists.

The forum, “Prospects After the Asean/G-20/East Asia/Apec Summits,” discussed political and economic challenges facing East Asia, including countries in Northeast and Southeast Asia.

China’s emergence was a main topic for Singaporean scholar Simon Tay, who said, “China has calmed the waters.

“The U.S. competition with China and Chinese contests with other Asians mean that Asians also have reasons to not readily welcome a China-dominated Asia,” said Tay, reading off a paper he wrote.

China, whose fast growth was underscored by it overtaking Japan as the world’s second largest economy this year, is showing an assertive attitude in territorial disputes in the East and South China Sea, taking tensions with several Southeast Asian countries and Japan to new heights.

Tay, the chairman of the Singapore Institute of International Affairs, said the inward-looking, economically absorbed attitude of the U.S. is making it more important for smaller countries in East Asia to work together with changes in the security environment of the region as a result of China’s rise.

“The Obama administration seeks to engage Asia on many global issues, but it is distracted by domestic politics in the U.S.,” he said. “The wounded America feels that it has been harmed by unfair trade and that many jobs have been lost to Asia. To them, globalization has an ugly face, and one that is Asian.”

Tay added that to respond to such changes, the rest of Asia can strengthen cooperation by choosing among three options, which he billed the Asia-Pacific Century approach, the Asian Bloc approach and the Global Asia approach.

But Tay said intra-Asian cooperation shouldn’t go so far as to alienate the U.S.

Some scholars like Tang Siew Mun, director of the Institute of Strategic and International Studies of Malaysia, said political stability in the region depends on how much the U.S. and China engage with each other.

As the two major global powers that affect the region, China and the U.S. should maintain an appropriate distance: being too close or too distant will not be good for the rest Northeast and Southeast Asia, he said.

Thitinan Pongsudhirak, director of the Institute of Security and International Studies of Thailand, warned that China’s economic success could lure some Southeast Asian countries to backtrack on their democratization. Korea, he said, can help Southeast Asians stay alert about China.

“China’s model of strong central control together with robust economic growth may appeal to certain Asean regimes,” he said. “Chinese clientel-ism appears to reign over certain nondemocratic and undemocratic countries in the region. Here is where South Korea can play a shining role as a leading democracy in the region. Seoul’s phenomenal success counterbalances China’s authoritarian shadow over Asean.”

On Asean, Tay told the Korea JoongAng Daily that for Asean to be a more responsible regional partner with Korea, it has to raise its voice on issues about other countries in the region, which it hesitates to do, not wanting to interfere in other countries’ internal affairs. The Asean Regional Forum held in Hanoi, Vietnam, in July expressed support for a UN Security Council chairman’s statement that condemned the sinking of the South Korean warship Cheonan in March, but did not mention the North as the culprit.

“Asean must behave, speak up clearly and say this is wrong, this is not right,” Tay said. “In the current situation, though difficult and politically sensitive, Asean must look at behaviors of various states, including the regime in North Korea.”

The Korea-Asean Cooperation Forum started in 2006 at Korea’s initiative to reach out to Southeast Asian nations. The forum is held annually in Asean member countries. The first was held in Jakarta, Indonesia, in 2006, followed by meetings in Hanoi in 2007, Siem Reap, Cambodia, in 2008, and Kuala Lumpur, Malaysia, last year.

The Korea Foundation has organized the annual event, in cooperation with its counterparts in the Asean countries. This time, the Institute of Security and International Studies of Thailand co-organized the event.

Also discussed during the forum were economic challenges stemming from global currency imbalances and ways to strengthen economic ties in the region, including the creation of an East Asia free trade agreement.