Last week, the Korean military was overhauled. The ROK 3rd Corps was disbanded, leaving the ROK 1st Corps as the only outfit of its size in the ROK Army. The U.S. also took back operational command of Korean troops.


The ROK Armed Forces was now in the hands of the U.S. Army.

Gen. James Van Fleet of the Eighth U.S. Army took it upon himself to improve the ROK Army by implementing an aggressive retraining campaign.

Having had firsthand experience in training regiments, it was only natural for General Van Fleet to be displeased with the ROK Army’s failure against the Chinese People’s Liberation Army in May of 1951. I think he felt at the time that without more basic training for Korean soldiers, it would have been useless to equip the ROK Army with advanced weapons.

It was quite embarrassing for us at the time, but it was something we needed. We would continue to be the target of North Korean and PLA troops and it made sense that enemy troops would target a weaker ROK Army instead of our better-trained American allies.

The problem was that we were not just a shade weaker than the U.S. military forces, we were far behind. One PLA report compared the ROK Army to floating plants.

General Van Fleet had discussed such matters with me during a visit to Gangneung, Gangwon. The general said that a structured training system should be implemented in the ROK armed forces. He suggested securing a location in Yangyang, also in Gangwon.

After he made the decision to disband the ROK 3rd Corps, General Van Fleet placed the ROK 3rd Division under my command as part of the ROK 1st Corps.

Gen. Van Fleet then gave me orders to train the 3rd Division at the new training grounds. This included all officers under the command of Gen. Baek Nam-kwon.

The duration of the camp was set for nine weeks at a field training center set up by Gen. Van Fleet.

U.S. 9th Corps Commander, Brig. Gen. Thomas J. Cross, was placed in charge of 150 commissioned and non-commissioned men. The center would serve as the main training base for newly formed divisions a year later.

The nine-week training course, which included weapons handling and military tactics, was tough on all of the men. Each level was followed by a performance test and those who did not meet the required grades were forced to repeat the session.

The U.S. drill instructors were veterans who had served in World War II. The ROK Army relearned the basics at the field training center.

After the ROK 3rd Division completed the grueling training course, it was stationed with the U.S. 10th Corps.

Over the following months, all 10 ROK Army divisions underwent the nine-week retraining course and returned to the front lines as better soldiers. 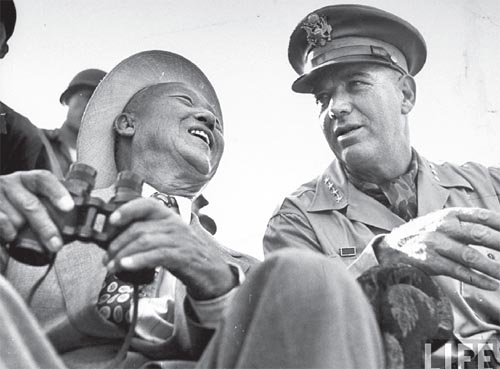 
Getting to know Gen. Van Fleet

To get a better understanding of why Gen. Van Fleet placed such emphasis on training, one need look no further than his past experiences with the U.S. Army.

Before graduating from West Point in 1915, Gen. Van Fleet was a fullback on the Black Knights varsity football team that went undefeated in 1914.

As a major, Van Fleet oversaw the Reserve Officer Training Corps program at Florida State University and was also a part of the Seminoles coaching staff for eight years.

Gen. Van Fleet once told me that he learned a lot about teaching and training men during his tenure as a coach at Florida State.

As the Supreme Allied Commander of the Allied Expeditionary Force during World War II, Eisenhower successfully planned and carried out an assault on the coast of Normandy in June of 1944.

After successfully carrying out his mission on D-Day, Van Fleet was promoted to commander of the U.S. 3rd Corps. One of his most significant achievements was in Greece as he was instrumental in providing support to the Greek government and its military advisers during the Greek Civil War (1946-1949). Gen. Van Fleet’s assistance proved to be instrumental in the Greek government’s victory over guerilla forces.

Gen. Van Fleet was a personable man who seemed to get along with everyone. President Rhee was known to clash with Gen. Walton Walker and Gen. Matthew Ridgway, but he got along well with Gen. Van Fleet.

Gen. Van Fleet would invite President Rhee and the first lady to his office at Seoul National University’s College of Liberal Arts and Sciences building in Dongsong-dong for weekend dinners. He was said to have served steak or turkey on most occasions.

Gen. Van Fleet was of Dutch descent and came across as mild-mannered. Every time I would go on walks with him to discuss military matters, he would always reach into his pocket and pull out some chocolate to share with me.

Years later, during the 2002 Korea-Japan World Cup, every time I saw Korea national football team manager Guus Hiddink on television (who is also Dutch), I was fondly reminded of Gen. Van Fleet.

When I was promoted to chief of staff in 1952, Gen. Van Fleet played an instrumental role in helping me increase the number of ROK Army divisions from 10 to 20. Gen. Van Fleet was a stern commander who did not permit mistakes under any circumstances during battle, but he was a warm-hearted and generous man away from the battlefield.

He passed away in 1992 at the age of 100. I had the opportunity to visit him at his home in Florida in 1990 with my eldest daughter who was living in New York at the time. At the time, he was not in good physical condition and was limited to a wheelchair.

Gen. Van Fleet seemed genuinely happy to see me. As we sat next to each other and reminisced about the Korean War, the general even shed a few tears.

When it came time for us to leave, Gen. Van Fleet whispered something, but I could not make out what he was saying.

I asked his daughter what the general had said. She replied that he wanted her to serve us lunch before we set out on the road. That pretty much sums up Gen. Van Fleet and the type of caring person that he was.