Drill to take place no matter what

Drill to take place no matter what

South Korean soldiers patrol a road along the coastline of Yeonpyeong Island yesterday, ahead of possible military drills this week. [Joint Press Corps]


Describing the upcoming maritime live-fire drill near Yeonpyeong Island as an exercise of South Korea’s sovereignty, the presidential office and the military made clear yesterday that the drill will go ahead today or tomorrow.

North Korea has threatened powerful retaliation for the drill and China and Russia have made public their opposition to it.

“The exercise is a legitimate action to defend our territory, and it is a matter of our sovereignty,” said a senior Blue House official. “No other country should argue the rights and wrongs about this, and the Joint Chiefs of Staff will make a final decision on the date taking into account only the weather conditions and no other outside factors.”

“Did we ever oppose a military exercise by China or Russia?” he asked. “The security council should not discuss our plan for a firing drill, but first discuss how to punish the North for its uranium enrichment and attacking civilians on Yeonpyeong Island.”

Another senior presidential aide said the drill is the one and only chance for the South to defend its western inter-Korean maritime boarder.

“If we do not go ahead with the exercise, it means we will never be able to stage a firing drill near our five northern islands in the Yellow Sea,” he said. “That means the Northern Limit Line will lose its meaning, and that means the capital region will be under threat. That’s precisely what North Korea wants.”

He also said that if the North retaliates, “It will learn that the South is not soft.” Military officials shared that sense of determination yesterday.

“No matter what happens, we will go ahead with the firing exercise,” said a top official at the Ministry of National Defense. “The only thing that matters to us is the weather.”

The weather is a crucial factor because observation of the points of impact is key to a live-fire drill. The Defense Ministry official said that the drill could be delayed because of bad weather. He also dismissed pressure from Beijing and Moscow.

“When we were weak, maybe in the Joseon Dynasty era, we had to try to please the superpowers,” he said. “But we are not such a weak country anymore.” 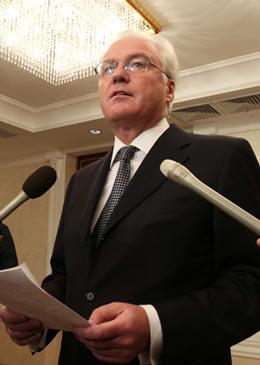 Chinese Foreign Minister Yang Jiechi and Russian counterpart Sergei Lavrov called for restraint from both parties to avoid worsening the situation. According to China’s state-run Xinhua News Agency, Yang phoned Lavrov on Saturday to discuss the tense situation on the Korean Peninsula and warned that it could “further deteriorate.”

“China firmly opposes any actions to cause tension and worsen the situation, and demands both sides on the peninsula show calmness and restraint, carry out dialogue and contact, and completely avoid any actions that would fuel tension,” Yang said.

According to Xinhua, Lavrov said that Russia attaches high importance to developments on the Korean Peninsula and that Russia has expressed concern to relevant countries, demanding all parties concerned be calm.

Ahead of the phone call, Chinese Vice Foreign Minister Zhang Zhijun released a statement calling the situation “precarious” and said that China has told the two Koreas that “the people on the two sides of the peninsula would be the first to suffer” in case of bloodshed. Last Friday, Zhang summoned Yu Woo-ik, South Korean ambassador to China, to express concern over the upcoming military drills.

Russia called for an emergency, closed-door meeting of the UN Security Council, which took place yesterday. Russian ambassador to the United Nations, Vitaly Churkin, said that the UN should send a “restraining signal” to both North and South Korea.

According to the military, K9 howitzers, coastal guns, 60-millimeter and 80-millimeter mortars and Vulcan cannons will fire toward the waters southwest of Yeonpyeong Island. Marines on the island will position weapons, which won’t be used in the exercise, to counter a possible North Korean attack.

Weapons deployed to the island following the North’s shelling will point at the North’s bases, while the Artillery Hunting Radar system will be in operation.

Last week, South Korea announced its plan to stage the same live-fire artillery drill off the island that it conducted on Nov. 23, which led to the North Korean attack. The military said it would pick a date between Saturday and Tuesday for the single-day exercise.

After the announcement on Thursday, the North issued a series of threats to counter the drill with stronger attacks, even threatening nuclear war. The North’s military also sent a threat to the South via a telephone message on Friday, but Seoul sent no reply.

“If North Korea attacks the South over our exercise in our territorial waters, we will counter it not based on the rules of engagement but in terms of exercising our right to self defense,” said a military official. “Representatives from the Korea-U.S. Combined Forces Command and the United Nations Command will also observe the drill.”

Military officials said that not only the Army, but also the Air Force and the Navy have completed their preparations for possible North Korean retaliation.

In the event of an attack, the Army will fire its K9 howitzers and multiple rocket launchers. A single shot of the Multiple Launch Rocket System is capable of destroying an area twice the size of a football field, the military said.