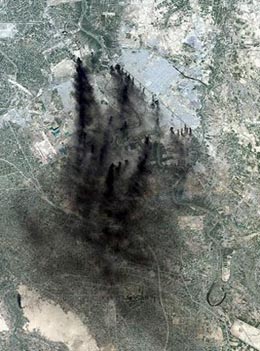 The aerial image in question posted on DC Inside.

On the day of the Yeonpyeong Island bombardment by North Korea, images on television and the Internet shocked people in Korea and around the world as they witnessed the first military attack on Korean civilians since the end of the Korean War.

One particularly stunning aerial image of plumes of smoke coming from a bombed-out territory made it onto local broadcaster KBS and even CNN. It turns out that image was a fake. The territory being bombed wasn’t Yeonpyeong at all, but Baghdad during the initial days of the U.S. invasion of 2003.

The picture was available for public viewing, and misusing, on the Web site of NASA. According to prosecutors yesterday, the picture was uploaded onto a popular South Korean Internet discussion board, DC Inside, by an American soldier of Korean descent.

The 20-year-old soldier, surnamed Mo, is currently serving with the U.S. Army in Washington State, prosecutors said. He posted the picture after seeing numerous Koreans discussing the attack, stating it was a satellite image of Yeonpyeong Island from U.S. military intelligence.

South Korean Netizens soon spread it around on portals and networking Web sites like Twitter, until it was picked up by local and international television channels.

The soldier’s actions and identity were reported to the U.S. Army, prosecutors said yesterday.

“Mo pretended that the image, which was of Baghdad being severely pounded by U.S. bombs, was of Yeonpyeong Island, and it led citizens who saw it on the internet and television to believe the situation was worse than it really was,” said an official at the Seoul Central District Prosecutors’ Office. “The U.S. Army was informed of his actions and of our will to make him take responsibility for his actions.”

Prosecutors have indicted 28 people for spreading false rumors via the Internet or cellular phones directly after the Yeonpyeong attack.

It has also given suspended sentences to 19 rumormongers who are either underage or whose actions were considered relatively harmless.