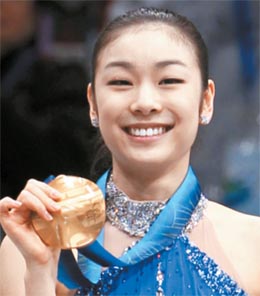 Female Korean athletes put together memorable performances across many fields, from ice rinks to football pitches and golf courses.

A figure skater won the country’s first Olympic gold medal in ladies’ singles, a woman also brought Korea its first Winter Games gold in speed skating, and seven Korean golfers on the LPGA Tour combined for nine victories, while the world’s No. 1 woman golfer and the 2010 LPGA Tour money champion are both Koreans.

Figure skater Kim Yu-na got the ball rolling in February at the Winter Olympics in Vancouver, Canada. Entering the competition as the heavy favorite and feeling the weight of the entire nation, Kim exceeded lofty expectations.

She was especially clutch in the short program on the first day. Just before Kim’s turn, Mao Asada, her archrival from Japan, scored her season best of 73.78 points to take the lead. Kim took a deep breath and set a world record with a mark of 78.50.

She set another world record the following day, scoring 150.06 in the free skate, outscoring Mao by almost 20 points. Kim’s winning total of 228.56 stands as the highest in the revamped international judging system.

On the long oval in Vancouver, Lee Sang-hwa made history in speed skating, taking the women’s 500-meter title and becoming Korea’s first female gold medalist in the sport.

Kim and Lee helped Korea post its best-ever tally at the Winter Olympics. For the first time, the country won Winter Games gold medals in events other than short-track speedskating. Aside from Lee, Mo Tae-bum and Lee Seung-hoon each grabbed a gold medal in men’s speed skating. Lee Jung-su was a double gold medalist in men’s short track.

In March, Seo Hee-kyung became a surprise first-time winner at the KIA Classic on the LPGA Tour. Four different Koreans won four straight LPGA events from late October to mid-November. Shin Ji-yai ended the year as the first-ranked female golfer in the world, and Choi Na-yeon finished with the most prize money and the best scoring average in the LPGA. They had two victories apiece this year.

Footballer Yeo Min-ji and her under-17 team were the nation’s darlings in September, as they marched toward the FIFA U-17 Women’s World Cup trophy.

In the quarterfinals, Korea matched the speedy and skilled Nigerians goal for goal, and eked out a 6-5 win in extra time, powered by Yeo’s four goals. In the semifinals, facing a physical Spanish team, the Koreans built a 2-1 lead in the first half and played lockdown defense to hold on for the one-goal win.

Korea met Japan for the championship, and they went to a penalty shootout. After Korea’s first kicker Lee Jung-eun missed, five shooters in a row converted their chances for the 5-4 win.

Yeo received the Golden Ball as the most valuable player of the tournament and also the Golden Shoe as the leading scorer, with eight goals.