YouTube star found success in going his own way

YouTube star found success in going his own way 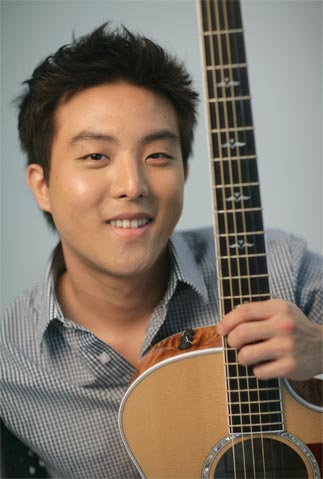 If you have surfed YouTube looking for new music, you may have heard of David Choi, a Korean-American singer, songwriter and producer from Los Angeles. He earned a spot on the musical map after he posted his “YouTube (A Love Song)” on the video-sharing site in 2006. The song was an instant hit and things only got better from there. The fanbase he built there and on his Web site (www.davidchoimusic.com) allowed him to make his first self-produced album, “Only You,” in October 2008. His second self-produced album, “By My Side,” came out this year. In the meantime, he has kept busy touring and continues to post original and cover songs on YouTube and his Web site.

He had such a big following that he was asked to enter the talent show “Superstar K,” which brought fame to another Korean-American, John Park, and to appear on other Korean shows, including SBS’ “Star King,” but he said he declined because he isn’t interested in the constraints that come with commercial success.

But when the Seoul Metropolitan Government asked him to be in a promotional video for the city of Seoul, he accepted.

He was here to shoot the video last Friday and shot another promo video for the Korea Tourism Organization yesterday.

Choi took time out of his busy schedule to sit down with the Korea JoongAng Daily on Saturday at a restaurant in Myeong-dong to talk about his music and his path to success.


Music in his veins

Choi says he got his musical talent from his father. His father won first place in TBC’s Beach Song Festival and expected to have a career as a singer, but when the military dictatorship of Chun Doo Hwan took over in late 1979, TBC (the JoongAng Ilbo’s broadcasting company) was disbanded and his life took a different path. His father returned to music after immigrating to the U.S., when he opened a music store.

Choi said that like other Korean-Americans of his generation, he started taking violin and piano lessons when he was young. And like many other children, he hated practicing.

“It started off with a dislike of practicing which turned into a hatred for all things violin and piano. I recall even at one point, I hated music,” Choi wrote on his Web site.

Then one day in the sixth grade, he heard his first pop song.

“The song was ‘All Star’ by Smash Mouth,” he wrote. “It was catchy. It was cool. I felt good listening to it.”

When he was 16, he started writing and producing his own music after a classmate brought to school a piece of techno music he had composed.

“I was in the same room and he was saying, ‘Yeah, I made this music.’ I was like, ‘You can create your own music?’” Choi said in the interview. “So I went home and composed something on my piano and that’s how it started.”

As a senior in high school in 2004, he entered and won the “David Bowie Mash-up Contest,” which offered a car as the grand prize. He decided to forgo the wheels and set up a studio instead. A month later, he won USA Weekend Magazine’s song-writing contest for teens, and got to meet Usher.


The road to success

It has been said that there’s a glass ceiling for Asian and Asian-American artists in the U.S. music industry. But Choi said that things have changed since Far East Movement became the first Asian band to hit No. 1 on the Billboard and iTunes charts with their single “Like a G6.”

“[Some people] just sign with a major label and they can promote you as a new person, but as an Asian, it’s a lot more difficult,” he said. “You can’t just come to another country and expect that it is going to be big. You’ve got to build it. The people who listen to your music, they know if you are real or not.”

Choi said he thinks he became successful because he built a strong fan base on YouTube before releasing albums.

Since posting his first song to YouTube, he has continued to post music and video to both the video sharing site - where he has more than 620,000 subscribers and more than 77 million total video views - and his Web site.

He is modest about his sudden fame, saying he doesn’t know how it happened.

“I just tried to be myself,” he said.

Choi has never signed with a label, preferring the freedom that comes with producing his own albums.

“I don’t want to be manufactured,” he said.

Still, being a self-made man is time-consuming. And self-promotion is something that doesn’t come easily to Choi, who described himself as shy.

However, he said that sharing his videos on the Web helped him to overcome his shyness.

“One of the main things I really appreciate about the whole experience is that it has taught me to accept myself for who I am,” he said.

He recently posted an ad on his Web site for an assistant to help him with the administrative side of the business. That, he said, will give him more time to focus on his music and work in collaboration with other artists.

Meanwhile, Choi has moved from YouTube to the concert hall, with performances in the United States, Canada and now Korea. But he said the transition from his studio to the stage didn’t phase him.

“I’ve played for 30 people before and up to a couple thousand,” he said. “My biggest performance was an event called Kollaboration in L.A. in February 2009.”

The singer is currently in talks to record the title song for “My Princess,” a drama that will air next month, starring Song Seung-heon and Kim Tae-hee, according to Jake Lee, Choi’s manager in Korea.

And what’s next for the singer?

“My future plan is to continue making music. I’ll do whatever comes my way as long as I have fun doing it,” Choi said.