Guns on Yeonpyeong blast for 90 minutes

Guns on Yeonpyeong blast for 90 minutes 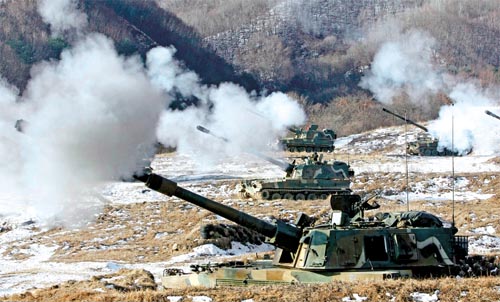 South Korea conducted a live-firing drill yesterday at 2:30 p.m. from Yeonpyeong Island with K9 self-propelling howitzers and several other guns. The Ministry of National Defense did not release photos or videos of the firing drill. This is a file photo of K9 howitzers in a drill in February at Yanggu, Gangwon. [YONHAP]


South Korea conducted a live-fire drill from Yeonpyeong Island in the Yellow Sea starting at 2:30 p.m. yesterday for about an hour and half, which ended with no apparent retaliation from the North.

The drill was delayed three times from its scheduled start at 11:00 a.m. apparently due to fog that blanketed the area from early yesterday morning.

“Our troops are still on alert for any emergencies that may occur and we are maintaining a status of direct response while observing the movements of the North’s military,” said a Joint Chiefs of Staff official after the drill. “Our military will keep defending the border islands in the northwest.”

According to the official, there were no unusual movements by the North Korean military except for troops on the western shoreline adopting a battle posture.

In the late afternoon, North Korea’s official news service said the drill wasn’t worth reacting to.

“We felt it was not worth reacting one-by-one to military provocations,” the KCNA quoted the North Korean People’s Army Supreme Command as saying.

The exercise was held with encouragement from the U.S. and criticism from China and Russia, who insisted that the drill would only provoke the North and escalate tension on the Korean Peninsula.

“This drill is one that we have been doing for a long time and it is a regular, just form of defense,” said Ministry of Foreign Affairs and Trade spokesman Kim Young-sun yesterday. “We believe this is within our sovereign rights.” 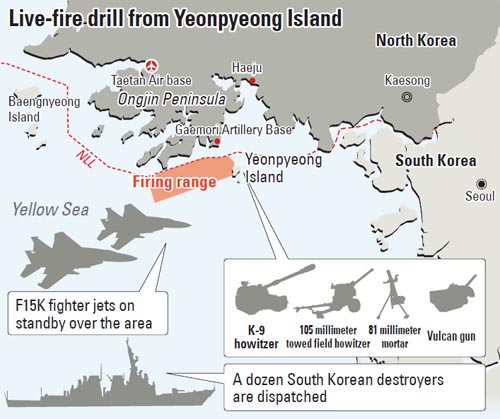 The Ministry of National Defense said the troops on Yeonpyeong utilized all the firepower they had, including K9 howitzers, 105-millimeter towed field guns, Vulcan guns and 81 millimeter- and 60 millimeter-mortar guns.

Yesterday’s exercise employed guns pointed southwest from Yeonpyeong Island toward an area in the sea that measures 40 by 20 kilometers.

The Defense Ministry said the Marine base on the island would fire roughly 2,000 shells leftover from the firing exercise on Nov. 23, which sparked the North’s bombardment of Yeonpyeong. In that drill, the military had planned to fire 3,657 shells with 11 types of guns but was forced to halt when North Korea started firing at the island.

Preparations against a North Korean retaliation or a possible exchange of fire were also made on a large scale.

South Korean military forces put F-15K fighter jets on standby in midair. And the Navy sent 10 ships to the waters around the island, including the 7,600 ton-Aegis class destroyer King Sejong the Great.

About 20 U.S. soldiers stationed in Korea also participated in the drill with communications, control and medical aid. Nine members of the UN and its Military Armistice Commission observed the drill.

Ahead of the drill, some 1,100 civilians on the two small islands that make up Yeonpyeong were sent to air-raid shelters in case of North Korean retaliation.

But the fear never materialized.

“We shouldn’t be dragged by the nose by North Korea,” said Yeonpyeong resident Hwang Byeong-sik, 59. “We need to make a firm response. And in that light, the drill must go on.”