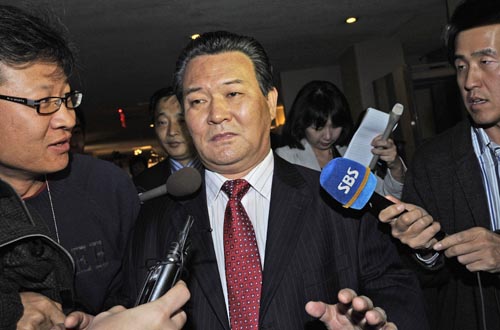 North Korea’s ambassador to the United Nations Sin Son-ho, center, declines to answer questions at the UN on Sunday. The UN Security Council held an emergency meeting called by Russia regarding rising tensions on the Korean Peninsula ahead of a South Korean military exercise yesterday. [AP/YONHAP]


The United Nations Security Council failed on Sunday to take a stand on North Korea’s deadly shelling of a South Korean island on Nov. 23, as inter-Korean bickering over the incident appeared to be escalating into another military confrontation.

China was against adopting a statement that would condemn the artillery attack on Yeonpyeong Island, according to diplomats attending the emergency UNSC meeting on Sunday in New York.

The other members of the 15-member council agreed to condemn the attack, although Russia was opposed to mentioning North Korea or Yeonpyeong in a statement, the diplomats said. The UNSC has to reach decisions unanimously.

Four South Koreans, two of them civilians, were killed in the North’s first attack on South Korean territory since the end of the Korean War.

“We were not successful in bridging all the bridges,” said Vitaly Churkin, Russia’s ambassador to the UN, after the emergency meeting that he convened to try to ease tensions on the Korean Peninsula.

Delegations from both Koreas, neither UNSC members, attended a portion of Sunday’s meeting.

Churkin said hope is alive for reaching consensus through unofficial talks between the UNSC member countries, which some observers said would resume as early as Monday.

Susan Rice, American ambassador to the UN, however, told reporters that it is unlikely the gap between the member countries will be bridged.

Park In-kook, South Korea’s UN ambassador, told reporters after the meeting that it was not a complete failure for South Korea.

“Russia’s call to convene this meeting was intended to forge an international community request for both the South and the North to refrain from action, but in the end, most of the countries at the meeting took a stance to condemn North Korea over the Yeonpyeong bombardment,” Park said.

Hours after the UNSC meeting, South Korea conducted a live-fire drill on Yeonpyeong in the Yellow Sea, near the maritime border, according to the Ministry of National Defense.

Seoul claimed that the drill in South Korean waters was defensive in nature and such drills have been performed on a regular basis in the past. But the North, which cited an earlier drill as the reason for its Nov. 23 attack, vowed harsh retaliation if South Korea went ahead with the drill.

Pak Tok-hun, North Korea’s deputy ambassador to the UN, repeated the threat of “retaliation” in an interview with the JoongAng Sunday, saying the North always carries through on its pledges. If diplomatic measures through the UNSC are not successful, the North will turn to military means, he said.

Pak claimed Seoul’s live-fire drill on Yeonpyeong and other areas near the Northern Limit Line is a “military provocation” against the North, which has not accepted the NLL. He claimed that a shooting drill in the area, from which the North Korea’s western coastal area is less than 19.2 kilometers (12 miles) away, reveals Seoul’s real intentions.

The area around Yeonpyeong was also the location of deadly inter-Korean naval skirmishes in 1999 and 2002. In March, 46 South Korean soldiers on the warship Cheonan were killed near the maritime border area in what a multinational investigation concluded was a torpedo attack by the North, which has denied it.

Pak said that responsibility to ease inter-Korean confrontation lies with the South, citing the establishment of a joint peace-cooperation zone near the disputed maritime border in 2007.

“[The two Koreas] promised to create a joint fishing area in a place that [the South] now says it will hold a live-fire drill,” Pak said. “It needs to follow through with the agreement.”