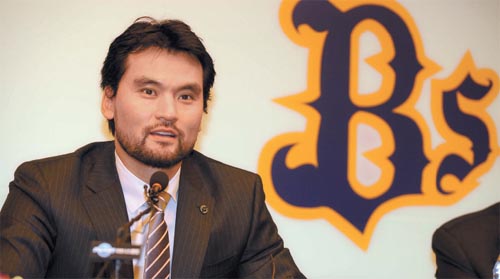 Park Chan-ho announces his signing with the Orix Buffaloes at a press conference at his Park 61 fitness club in southern Seoul, yesterday. [NEWSIS]


Veteran pitcher Park Chan-ho inked a one-year deal worth $1.2 million plus another million in incentives with the Orix Buffaloes of the Nippon Professional Baseball league, but he assured his fans that he will play in the Korea Baseball Organization before he hangs up his cleats.

Park discussed his contract and thoughts at a press conference at his Park 61 fitness club in Yeoksam-dong, southern Seoul, yesterday.

The 37-year-old, who is the winningest Asian pitcher in Major League Baseball history with 124 wins over the course of 17 seasons, had said in recent months that several MLB teams had varying interest in signing him.

But one of the biggest factors in Park signing with Orix seems to have been his family. His wife is a third-generation Korean-Japanese. Osaka and Kobe, where Orix is based, boasts the largest Korean population in Japan.

“This is a decision I reached after careful consideration,” said Park at the press conference. “When I got in contact with Orix officials last month, talks of a starting role on the team was mentioned and the opportunity to start again was alluring.

“After notching my 124th win last season, I began to wonder how I would retire from the game. There are many reasons - but my kids are getting older and I saw a better environment for my wife and children in Japan.”

Orix officials have said that Park will have a spot in the starting rotation. Park has always preferred a starting role to spot pitching in relief.

Having signed Korean first baseman Lee Seung-yeop to a two-year deal earlier this month, the Orix Buffaloes now have two of the most recognizable Korean players in the world on its roster. The Koreans are expected to give a boost to the team’s broadcasting ratings, ticket sales and merchandising fees.

“[Another reason] I signed with Orix because they had inked Lee earlier this month,” Park said. “I want to help Lee return to form in any way I can. I also think he will be a big help as I settle down there.”

Park had been linked to several rumors that he would finish his playing days in the Korean Baseball Organization. While that scenario failed to materialize, Park assured his fans that he would return to Korea to play out his baseball career.

“I promised my fans that I will finish my career in Korea,” said Park. “I had contemplated returning to Korea next season, but having discussed the matter with my wife, I thought it would be better for me to compete in the NPB before going to the KBO.

“My family was a big factor in my decision but I also thought time in the NPB would be a good learning experience for me and took a strong interest in the possibility.”