Rare glimpse of a master of whimsy

Rare glimpse of a master of whimsy 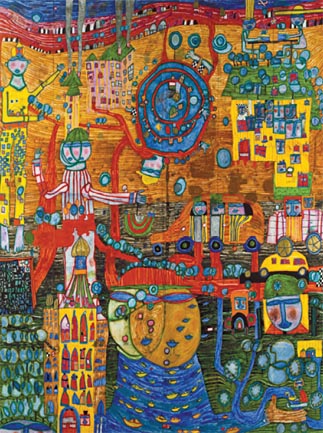 “The 30 Days Fax Painting” (1994) by Friedensreich Hundertwasser from the exhibit “Hundertwasser 2010 in Seoul,” which runs until March 15 at the Hangaram Design Museum in southern Seoul. Provided by the museum

Artist Friedensreich Hundertwasser (1928-2000) is not well known here, but Koreans will get a taste of his wild and whimsical works at the exhibition “Hundertwasser 2010 in Seoul,” which runs until March 15 at the Hangaram Art Museum at the Seoul Arts Center.

Hundertwasser was one of Austria’s most famous artists, a pacifist and environmental activist who eschewed straight lines and strict forms in favor of lush curves and fanciful flourishes. His works are said to resemble those of painters Gustav Klimt and Egon Schiele with their irregular, segmented forms.

The exhibition shows the artist’s colorful, asymmetrical paintings, graphic works and models of his architectural designs.

It starts with a series of paintings from the artist’s early years depicting boats floating over a river. Looking at them today, these early works take on an air of irony because they were painted in the midst of the Second World War. These were formative years for the young painter, and his experience during this period would inform much of his work throughout his life.

The artist was born Friedrich Stowasser on Dec. 15, 1928, to a Jewish mother and a German Catholic father. In 1949, at the age of 20, he took the name Friedensreich Hundertwasser, which means “peace kingdom, hundred waters.” The name was symbolic for the artist, who saw 69 of his relatives from his mother’s side die in the Holocaust, and signified his commitment to peace.

Another section of the exhibit shows the artist’s graphic works. Hundertwasser created graphic art pieces because he wanted his work and message to be widely available to the public.

In the next room there are more than 60 paintings reflecting the artist’s unorthodox painting style. Hundertwasser enjoyed painting on unusual surfaces. He often carried his work around in his pocket so he could continue painting if he saw something interesting. The work “Cathedral” (1951) was painted on the back of paper shopping bags. And “The 30 Days Fax Painting” (1994) is painted on a set of love letters the artist sent by fax.

Hundertwasser is more widely known for his architectural works, and in that respect he is often compared to Spanish architect Antoni Gaudi. Both artists use highly stylized, organic forms, but Gaudi’s work tended toward the Gothic and Art Nouveau.

To show the relationship among his works, architectural models of his creations are displayed between the paintings and graphic works throughout the exhibition.

One of the models is “Thermal Village Blumau” (1993-1997), a spa and resort complex. It shows Hundertwasser’s desire for harmony between nature and humans. There is no clear distinction between the building and the surrounding environment - grass covers the rooftop and crawls down the walls.

The exhibition carries out Hundertwasser’s environmental activism through donations to the Dream School project, which funds schools in Zambia, and the Welldone Project, which raises funds for digging wells in Congo, Africa.

In the artist’s words: “A dead person is entitled to reincarnation in the form of, for example, a tree that grows on top of him and through him. The result would be a cased forest of living dead. A garden of the happy dead.” This exhibition fills the museum with the forest of Hundertwasser’s works, giving the artist an afterlife with which he might have been pleased.