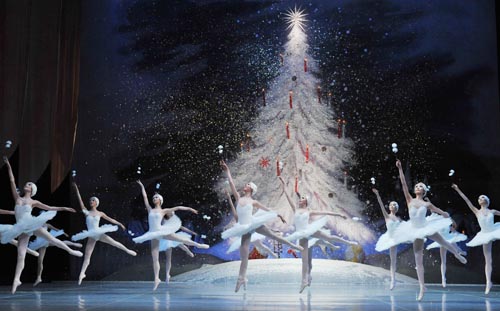 The Korea National Ballet presents “The Nutcracker” through Saturday at the Seoul Arts Center’s Opera Theater. It is one of three “Nutcrackers” to be performed this year. Another will be presented by Universal Ballet Company at its theater through Dec. 31. See THEATER, below. [NEWSIS]

The Mostly Philharmonic Orchestra and flutist Lee So-young are the featured guests.

Dec. 29 to 30: The Korean National Opera presents encore performances from the previous season and previews of pieces from the company’s upcoming season.

Dec. 30: Mahler’s Symphony No. 3 will be performed by conductor Chung Myung-whun and mezzo-soprano Karen Cargill.

To Saturday: The Korea National Ballet’s production of the holiday classic strictly follows the choreography of the legendary Yuri Grigorovich, who led Russia’s Bolshoi Ballet for 33 years. His version had its world premiere in 1966.

All of the mimed movements have been changed to dances, which means that the dances are technically challenging, the KNB said.

Today to Dec. 31: The Universal Ballet Company’s production of “The Nutcracker” uses the original 1892 choreography created by Lev Ivanov and designed for the Mariinsky Theatre in St. Petersburg, Russia. In this version, the children’s roles are performed by real children. In other versions the children are played by adults.

“Mother Ginger and her children,” a dance from Act 2, is the most fun for kids, given that 10 child dancers come out from under the gigantic skirt of Mother Ginger,” according to a UBC press release.

To Sunday: This production celebrates the 50th anniversary of Shilhum Theater.

The play aims to show the difference between the social status of France in the 18th century and how it is still portrayed in the present.

This performance is only for ages 13 and up.

To Dec. 28: The Seoul Metropolitan Musical Theater presents an encore production of “Annie,” three years after it was first shown in Korea.

To Dec. 31: This play, performed by an all-Korean cast, attempts to give new meaning to motherhood.

The play is based the novel of the same name by Shin Kyung-sook. Shin’s book has sold more than 1.2 million copies and topped the best-seller list for much of 2008 and 2009.

Performances are at 8 p.m. on Tuesdays, Thursdays and Fridays, at 2 p.m. on Wednesdays, and at 2 and 6 p.m. on Saturdays and Sundays. There are no performances on Mondays.

To Jan. 30: The legendary story of the three musketeers Athos, Porthos and Aramis returns to Korea, following sold out houses the last time it was presented here.

To Mar. 27: Aida returns to Korea after a five-year absence. The story of Ethiopian princess Aida is one of forbidden love. Aida is captured and sold into slavery in Egypt, where Egyptian military commander Radames falls in love with her. As the military commander of Egypt, Radames is forbidden to love a woman from a different country and he struggles to choose between her and his service to the Pharaoh. To make matters worse, the Pharaoh’s daughter Amneris is in love with him. Will Radames chose love or success?

To Jan. 17: Gigantic Christmas trees and a variety of lights will decorate the streets of downtown Busan at night from Nov. 30 to Jan. 17. About 90 trees have been installed along a one-kilometer section from the entrance of Gwangbokro to Chamseon Samgeori. The facades of large buildings are also decorated with Christmas trees.