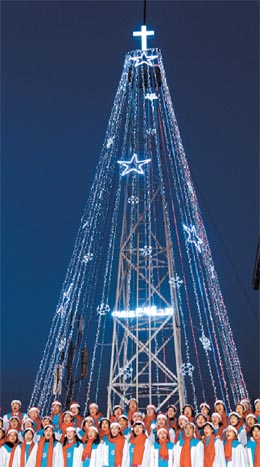 A metal tower with decorative Christmas lights and a cross on top was illuminated on top of Aegibong Peak yesterday to mark the holiday season, and North Korea might shoot it down.

The stylized tree’s 100,000 lights were lit up around 5:45 p.m. yesterday by a Christian church in Seoul. Reinforcements of South Korean soldiers were sent to guard the 155-meter (509-foot) peak in Gimpo, Gyeonggi, yesterday, and the military said it was on high alert.

“We are maintaining our alert level at the highest Jindotgae 1 at the western border islands, Aegibong Peak and all front lines,” an official at the Joint Chiefs of Staff said yesterday.

Aegibong is just 3 kilometers (1.9 miles) away from North Korean territory and the 30-meter structure, which is used to celebrate both Christmas and Buddha’s Birthday, was a form of anti-North propaganda that was stopped during the Sunshine Policy days of engagement with the North. The last time it was lit was in 2003.

Minister of National Defense Kim Kwan-jin said yesterday at the National Assembly that if the North shoots at the tower, the military would “boldly punish the North.” 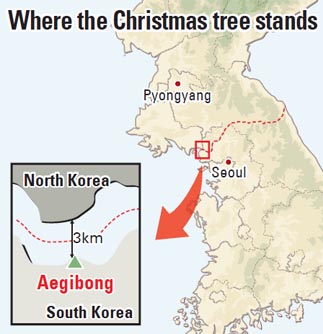 North Korea’s Rodong Sinmun said on Monday that the lighting of the tree tower would be a signal that an electronic display for propaganda messages that the South Korean military has installed at the demilitarized zone could also soon be activated, possibly leading to a military clash. In the past, the North has threatened to shoot the display and propaganda loudspeakers at the DMZ.

“As sharp tension is rising between North and South Korea, provocations that irritate the opposite party could lead to military clashes and to a full-blown war,” the paper said.

A South Korean military official told the JoongAng Ilbo last week that North Korea had specifically requested that the tree tower be dismantled during negotiations in 2004 that resulted in the suspension of all forms of propaganda at the inter-Korean border.

“They asked the tower be taken down as the lights on the peak and car lights on the freeway leading there irritate [the North Koreans] most,” said the official. In clear weather, the tower can be seen from Kaesong.

According to the official, the lighting of the tower this year is “not unrelated to the anti-North propaganda that the South Korean military has been involved in since the Cheonan sinking,” and that there is no reason for the military to stop the church from installing the tower and lights.

The Defense Ministry has been sending propaganda leaflets across the 4-kilometer-wide DMZ and into North Korean territory by balloon in response to the shelling of Yeonpyeong Island. Anti-Pyongyang broadcasts have also been made at the border, and 20 locations have newly installed loudspeakers along the demarcation line.

The tree-lighting came a day after the South Korean military conducted live-fire exercises from Yeonpyeong Island with no North Korean retaliation.