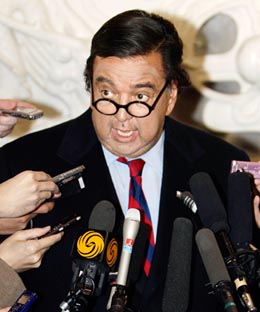 Bill Richardson speaks to the media yesterday after arriving in Beijing from North Korea. [REUTERS/YONHAP]

A high-ranking Seoul official told reporters yesterday that North Korea’s statement that it would allow nuclear inspectors to return is a meaningless gesture.

To prove that it would abandon nuclear programs, the North should return to standing by the Nuclear Nonproliferation Treaty (NPT), the official said. Pyongyang told New Mexico Gov. Bill Richardson that it would allow inspectors from the International Atomic Energy Agency back at its uranium enrichment facility. Richardson, who was in North Korea on a private visit, told reporters on Monday of North Korea’s change in position.

“To receive a genuine international inspection, (the North) should come back to the non-proliferation treaty table in advance,” said the official. “Coming back to the NPT means freezing and withdrawing all of its nuclear programs.”

The official said the mere presence of IAEA inspectors in the North is a maneuver to get legitimacy for continuing its clandestine nuclear development, he said.

Richardson said the North also agreed to sell its unused 12,000 nuclear fuel rods overseas as evidence of its sincerity to drop its nuclear ambition, which the Seoul official put aside as another insignificant act.

“After the North [last month] revealed its uranium enrichment program, it is a useless card,” the official said.

Richardson, however, assessed the North’s new position as making progress.

While in Beijing yesterday, Richardson told reporters, “They have (taken), I believe, a step in the right direction.”

Richardson, though, stressed that it is important for the North to follow through on its promises. “They agreed to the proposals that I made. ... Now there has to be deeds, not words,” he said, echoing the remarks made on Monday by U.S. State Department official Philip Crowley, stressing “what North Korea does, not what North Korea says.”

Meanwhile, Richardson said the North showed pragmatism by not responding to the South’s live-fire drill on Yeonpyeong Island on Monday, which Seoul said was defensive in nature. The North’s shelling of the island killed four South Koreans on Nov. 23.