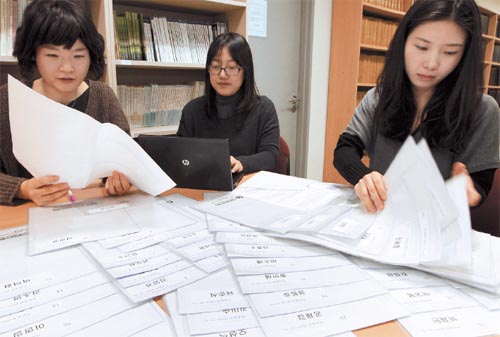 
A seminar on a patient’s right to refuse life support in hospitals was held in Seoul last month, and after a JoongAng Ilbo report the following day, more than a hundred people, mostly elderly, called the host of the seminar saying they wanted a “living will.”

The Bioethics Policy Research Center, which held the seminar “From Suffering Death to Meeting Death” at Severance Hospital on Dec. 15, said it has received about 40 calls a day asking for information on what it calls a no-life-support “pledge” since the article was published.

“Most of the calls were from elderly people,” Lee Eun-yeong, an official at the center, said. “Some people asked if they signed the pledge and kept it, would hospitals really take them off a respirator [when they are dying],” Lee said.

Son Myong-sei, the center’s director, said, “The pledge is actually effective if signed in advance [of a fatal illness].”

The pledge, called a “living will” in the United States, certifies that an individual doesn’t want to be given life support at the end of a fatal illness.

Bang Gyeong-gi, a 72-year-old resident in Seoul, signed the pledge with his 72-year-old wife. “I think life is only meaningful when I can move and think by myself,” he said.

Han Yeong-eon, a 66-year-old retired computer scientist living in Yongin, Gyeonggi, also signed the pledge with his 64-year-old wife after they watched Han’s bedridden mother suffer for seven years before she died.

“Even when their parents have little hope for recovery, children can’t give up easily,” Han said. “So we thought we should make it clear that we don’t want any kinds of life-sustaining treatment so as not to be a burden to our children.”

The campaign also attracted handicapped people. A 64-year-old resident in Seoul, Yun Suk-jeong, spends most of her life in bed, due to a disease of the spine.

“I signed the pledge because I was afraid the hospital wouldn’t accept my words when I was in that situation,” Yun said.

Song Yeong-suk, a 67-year-old resident of Seoul who signed a pledge, took 25 application forms from the center and persuaded her friends to participate in the campaign.