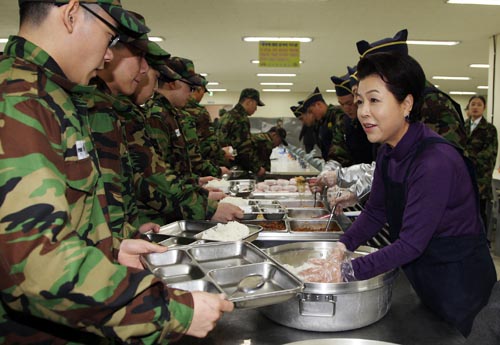 First lady Kim Yoon-ok helps distribute meals to soldiers yesterday at the Army boot camp in Nonsan, South Chungcheong. Kim visited the barracks, laundry rooms and kitchen and had a meal together with the soldiers. [YONHAP]


First lady Kim Yoon-ok visited the Korea Army Training Center yesterday in Nonsan, South Chungcheong, to cheer up new recruits in the first visit to the country’s main boot camp by a first lady in the 59-year history of the training center.

“The first lady visited the new recruits at the boot camp because she wanted to understand the feelings of the youngsters and the parents who sent their children to the military at this difficult time,” said Kim Hee-jung, presidential spokeswoman.

“The two Koreas are still divided, and I am very proud to see you fulfilling the military duty as a man of Korea in such a condition,” Kim said. “While you are defending the country, we will be able to trust you and put all our effort in to build a better nation.”

She also spent time talking with the soldiers at their barracks. Some of the soldiers read letters from their families aloud.

Said Kim: “I was reminded of the time when I sent my son to the military. He didn’t want to go at first, but after seven months, he said it was an invaluable experience.”

Kim offered good wishes for the new recruits to complete their training safely and maintain their health.

The Korea Army Training Center in Nonsan was established in November 1951 by President Syngman Rhee. While many presidents in the past had visited the boot camp, Kim was the first first lady to do so, the Blue House and the military said.

It was Kim’s third visit to uniformed personnel. She visited an Army unit in 2008 and a unit of riot police and conscripted policemen last year.