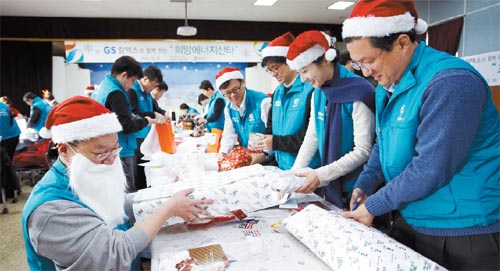 Other aspects of the company’s social contribution work focus on green growth, the environment in general and namum, a concept that involves the idea of sharing to create a brighter future for the earth and humans.

In terms of green sharing, GS Caltex promotes three main programs: “Green Edutainment,” which combines environmental education and entertainment; “Green Donation,” which looks to help children with environment-related diseases and refugees; and “Green Recycling,” which is aimed at environmental preservation. It runs several programs to provide support on the local level as well, including ones that provide scholarships and education.

Since 2005, GS Caltex has sponsored efforts to help residents who live alone and don’t have close family members. This month, 400 employees and other volunteers will visit these citizens in seven cities including Seoul, Busan, Daejeon and Daegu to provide them with some company and food.

About 60 GS Caltex employees also visited Guryong Town in Gangnam in Seoul to visit elderly residents who live alone, making rice cake soup with them and delivering necessities for the winter. Additionally, the company is hosting 18 different programs this holiday season, including one in which volunteers deliver Christmas presents to children.

The GS Caltex Hanmaeum Fund is a matching grant program that started in 2005. As part of the program, employees donate a certain amount of money to charities and related organizations and the company provides a matching sum. The program has raised more than 3 billion won through 2009.

Meanwhile, GS Caltex has a program in place in which it donates profits from certain products to children with environment-related diseases. At the same time, the company is helping build the Yeosu Cultural Art Park and is supporting local scholarship as well as schools in remote regions.