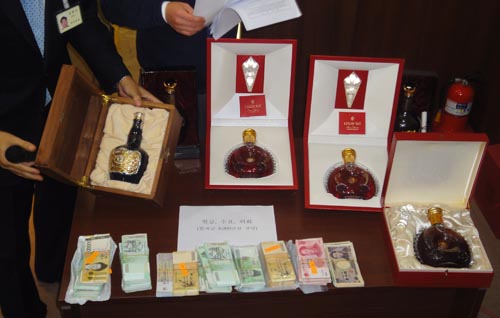 Suwon prosecutors on Monday display bribes and gifts allegedly given to Lee Dae-yub, former major of Seongnam, Gyeonggi. Provided by the prosecutor’s office


Prosecutors put on display bribes and gifts allegedly given from construction companies and civil servants to Lee Dae-yub, former mayor of Seongnam, Gyeonggi, which they said they found hidden in his house. They included expensive booze and luxury handbags allegedly accumulated during his eight-year term.

The Suwon District Prosecutor’s Office held a briefing on Monday and displayed the bribes found in Lee’s house.

“The investigation of Lee, which we have been conducting since August, is really meaningful because we finally confirmed the rumor that Lee got a wide range of bribes,” said Kim Oh-su, senior prosecutor at the office.

The office raided Lee’s apartment in Bundang, Gyeonggi, on Nov. 2 on suspicion of bribery and confiscated a wide range of items Lee had hidden.

According to the prosecutors, they found three bottles of Louis 13 de Remy Martin cognac beneath Lee’s bed, 30 other whiskey bottles on a balcony, some 30 luxury handbags and 300 ties in closets, and 80 million won in dollars and yen inside a first-aid kit and in the pockets of shirts.

The most impressive gift was a 50-year-old Royal Salute whiskey, which costs about 12 million won ($10,400), found behind a closet.

Only 255 bottles of Royal Salute were made to mark the 50th anniversary of the crowning of England’s Queen Elizabeth II, and only 20 were imported to South Korea. The wrapping paper alone is worth 200,000 won, prosecutors said.

“Because the wrapping paper is so expensive and only a few people use it, we can easily find who gave the whiskey to Lee,” the prosecutors said. “We are still trying to identify who gave Lee the 80 million won worth of currency and the expensive whiskey. We suspect the ties and bags, which were still in duty-free shop bags, are gifts from civil servants.”

The prosecutor said Lee’s relatives and assistants also received bribes from civil servants and construction companies, and the total amount of bribes Lee and his associates allegedly received is estimated at about 1.5 billion won ($1.2 million).

Lee, his two nephews and six assistants were indicted and detained, prosecutors said on Monday, and seven other people were indicted without detention.

According to prosecutors, Lee is suspected on charges of receiving 300 million won from three construction companies in 2008 and 2009 for allowing them to build exercise grounds and approving contracts for residential projects in Pangyo, Gyeonggi; embezzling about 188 million won of the city’s budget on the excuse of entertaining his staff; and embezzling 259 million won in salary for a civil servant who was actually his housemaid.

The 74-year-old Lee held office for eight years beginning in 2002.