Gov’t mulls vaccine after FMD gets to Gangwon

Gov’t mulls vaccine after FMD gets to Gangwon 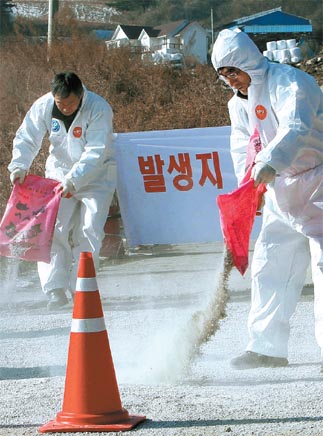 Officials spray quicklime yesterday to curb the spread of food-and-mouth disease as the disease broke out on a farm in Pyeongchang, Gangwon. [YONHAP]

Foot-and-mouth disease was found in Gangwon, the country’s most important province for livestock, for the first time yesterday. With the situation escalating into an unprecedented loss for the livestock industry, the government is said to have decided to vaccinate animals.

The Ministry for Food, Agriculture, Forestry and Fisheries confirmed yesterday that two cattle farms in Pyeongchang and Hwacheon, both in Gangwon, tested positive for the highly contagious disease. The farms are located 182 kilometers (113 miles) and 118 kilometers east of Seoul, respectively.

To mitigate the spread of the disease, all cows, dogs and chickens at the farms were slaughtered and buried. Livestock within a 500-meter radius of the farms will not be permitted outside the quarantine zone.

In addition to the two farms, one cattle farm in Chuncheon and another in Wonju, also in Gangwon, suspect FMD, raising concerns among health officials and area residents.

Currently, there are about 610,000 cloven-hoofed animals being raised at 16,000 livestock farms in the province, which boasts some of the best-known Korean beef brands such as Hoengseong and Daegwallyeong, which are named after their respective regions.

In Gyeonggi, FMD continues to spread. A hog farm in Yeoncheon and another in Gimpo and two cattle farms in Pocheon were confirmed positive for the disease.

Elsewhere, the ministry reported that a suspected case of FMD at a deer farm in Cheonan, South Chungcheong, 88 kilometers south of Seoul, tested negative for the disease.

Since the outbreak of the disease on Nov. 29, there have been 44 FMD cases, with over 224,000 livestock having been either culled or slated for slaughter. Of the 44 cases, nine were in Gyeonggi, two in Gangwon and the rest in North Gyeongsang.

With FMD spiraling out of control, the government has resolved to vaccinate against the virus.

Minister Yoo Jeong-bok said yesterday at an Agriculture Ministry meeting that the government may try a “ring vaccination” procedure around the infected farms.

“As the spread of FMD is so fast, [we] concluded that slaughtering is just not enough,” a ministry official, who requested anonymity, said. The government believes that at least 78 billion won ($67.8 million) is needed to secure vaccines for 3 million cows as well as for 10 million pigs. Thus far, the damage is estimated at more than 230 billion won, and the figure is likely to increase as the disease spreads.