Noh bursts onto golf scene in 2010

Noh bursts onto golf scene in 2010 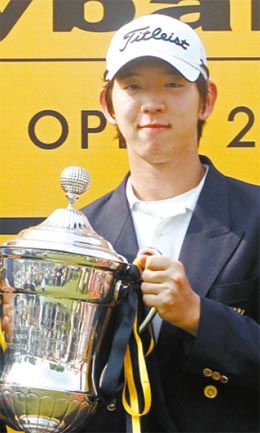 SINGAPORE - Asian golf uncovered a new star in 2010 with teen sensation Noh Seung-yul winning the Asian Tour Order of Merit as a battle between rival tours raged on.

Noh became the youngest player ever to top the money list after bursting onto the scene by winning the European Tour co-sanctioned Malaysian Open in March, while China’s Liang Wen-chong won the OneAsia Tour merit crown.

“I was happy to win the Malaysian Open this year. It allowed me to compete in Europe, the U.S. and also the three majors,” said 19-year-old Noh.

“It started from my win in Malaysia. The event was good for me,” added Noh, who won rookie of the year in 2008.

Australia’s Marcus Fraser, who won the Ballantine’s Championship in Korea in April, came second in the merit standings and said the tour was fortunate to have a player of Noh’s caliber.

“Everyone knew it was going to happen. Noh Seung-yul was always going to fly away with the Order of Merit title,” he said. “He’s a great player. The Asian Tour is lucky to have him on the money list.”

In an open year, the only golfer to win more than once on the Asian Tour was Japan’s Tetsuji Hiratsuka (Myanamar Open and Queens Cup) while Mohammad Siddikur became the first Bangladeshi to lift a trophy by claiming the Brunei Open.

Plenty of top European talent once again travelled to the region and some found success, including Padraig Harrington, who snapped a two-year winless streak when he won the Iskandar Johor Open in Malaysia.

Ian Poulter claimed the Hong Kong Open title while Adam Scott scored an unprecedented third victory at the Singapore Open. The Asian Tour, meanwhile, set a new landmark by co-hosting a U.S. PGA Tour event for the first time, with American Ben Crane sinking a pressure-packed birdie on the last hole to lift the CIMB Asia Pacific Classic trophy by a stroke.

“With such tremendous growth for golf in the region, the CIMB Asia Pacific Classic provided an exciting presence for the PGA Tour in Malaysia and Southeast Asia,” said PGA Tour Commissioner Tim Finchem.

A new 12-year television, production and global distribution deal was struck by the Asian Tour which players expect will attract more sponsors.

Three-time Asian number one Thongchai Jaidee, by far the most successful golfer in the region, said the agreement would reap benefits.

“It could be really big for the Asian Tour,” he said.

But undercurrents continued to run, with the Asian Tour and OneAsia Tour remaining at loggerheads. OneAsia, which has brought together tours from China, Korea and Australia, hosted 10 events, branching out into India and Thailand. It plans at least 13 in 2011 while the Asian Tour has announced a provisional 25-tournament schedule.

To counter any exodus, the Asian Tour rigorously enforced regulations that players who do compete on OneAsia without prior permission were fined $5,000, with the threat of suspension hanging over them. Few made the jump.

It was a sometimes rocky year for OneAsia which narrowly averted a boycott by Korean players in April. They cited discontent at the number of places available to Koreans at the Maekyung Open, the SK Telecom Open and the Korea Open but the issue was resolved when they were given reassurances.

Liang has been a firm supporter of OneAsia and topped their money list.

“I am very happy and honored. This is something that China supports and that gives me even more pride to take this trophy home,” he said. “This win will be encouraging for the development of golf back at home.”

In a sign that more battles lie ahead, Asian Tour chief Kyi Hla Han said in September that two tours could not realistically exist in the same region.

“I don’t think it is fair for the players to have to chose and when we had our federation meetings at the Masters and the Open, people pretty much understood and acknowledged that there is not room for two tours,” he said.