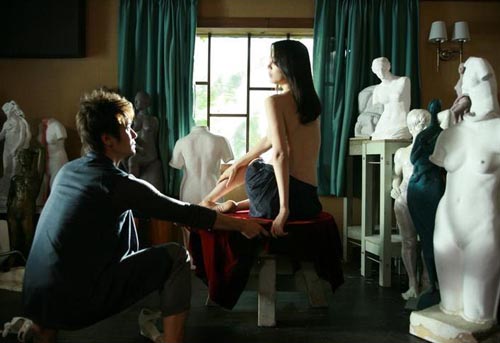 When a film is marketed as the “first ever,” it often means that the movie has nothing going for it other than that distinction alone. And so it is with “Natalie,” which instantly became the butt of every joke in town when it opened at local theaters in October.

The plot may as well be a what-not-to-do chapter in a screenwriting guidebook.

Sculptor and art professor Hwang Jun-hyeok (Lee Sung-jae) is a playboy at heart. But when beautiful dancer Oh Mi-ran (Park Hyun-jin) takes one of his art classes, he falls in love,

The two have a lot of hot sex but the professor doesn’t want to get married. In fact, his exact words on marriage are: “I don’t want to succumb to the tomb of love just for comfort or tradition.”

Right after this gem of a line, Oh blatantly puts her hand on her stomach, foreshadowing her pregnancy. By that stage, I was surprised that the film didn’t have her going for full disclosure by showing the character coming down with morning sickness.

After a while, Oh leaves the professor for a fellow student, Jang Min-wu (Kim Ji-hoon), who had loved her from afar. The two eventually get married. Ten years later, Hwang has an exhibition of his sculptures. The main attraction is “Natalie,” a life-sized nude sculpture of Oh.

When Jang hears about it, he goes looking for Hwang and the two men fight over Oh.

What’s even more precious than the plot is the dialogue in “Natalie.” Listening to these three characters speak is like having to endure that distant family member you see only during holidays who always speaks in cliches.

One of the highlights from the film was when Jang expresses his hatred for Hwang’s promiscuity: “Unlike you, there are many honorable people in this world who live only for love and truth.”

It’s not a very articulate critique from someone who is supposed to be an art critic, as Jang is.

My question for director Joo Kyung-Jung is this - why try to make an apple into an orange? If he had given up his artsy pretensions for the film, he could have played up its one strength - the three-dimensional sex scenes - and he would have had a hit on his hands. At least the film’s promoters were wise enough to recognize the film’s most alluring feature.