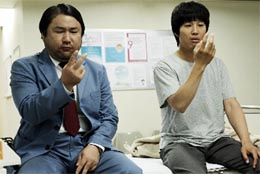 Cha Tae-hyun, the selfish but sentimental actor from the 2008 film “Scandal Makers,” returns to the big screen in “Hello Ghost!”

In the film, he plays a man possessed by four different ghosts - a perverted grandfather, a chain smoker, a crybaby and a famished boy.

Sang-man (Cha) is an orphan who has tried but failed to commit suicide many times. In his last attempt to commit suicide, he succeeds for 10 minutes and is brought back to life, an event that turns his life upside down.

From the moment he opens his eyes again, his body is occupied by four ghosts that move in and out of his body whenever they wish to get what they want.

At first Sang-man tries to get rid of them, but in the end he gives up and decides to do whatever they want so they will leave on their own.

By helping the ghosts, Sang-man discovers a part of life that he’s never experienced before and begins to understand the true meaning of friendship and love.

The film marks the directorial debut of writer-turned-director Kim Yeong-tak, who is known for the heartwarming comedies “Bold Family” (20050) and “Babo” (2008).

This 2008 holiday-themed love story is unconventional in many ways, but mainly for the fact that its direct-to-DVD style actually made it to the theaters in the United States a couple of years ago and actually received positive reviews.

Malone meets Mary (Oscar-winner Ellen Burstyn), who moves in next door, and she asks him out on a date.

From there, the two hit it off and Mary changes Malone’s life forever, but a major secret is revealed toward the end of the film that could change everything.

Sure, the film’s plot sounds like it would be perfect for a 10 o’clock showing on Lifetime, but with solid (but aging) star power in Landau and Burstyn, it’s hard to argue with this winter romance so close to Christmas.

“Tron: Legacy” is the follow-up to the 1982 film “Tron,” a movie that was considered at the time to be at the forefront of computer animation and graphics.

Nearly three decades have passed, and its sequel unsurprisingly boasts improved special effects (in fact, it’s in 3-D). Yet old habits are hard to break and, similar to the criticism that dogged the 1982 original, “Tron: Legacy,” the film offers a weak story line that doesn’t match the film’s relatively complex and dazzling special effects.

In the original movie, Jeff Bridges’ character, Kevin Flynn, is transported into a digital world where he fights for survival in series of games. In the end, Flynn emerges victorious over the evil computer program to retake control of his company, Encom.

The sequel takes place in 1989, and Flynn has mysteriously disappeared, leaving behind his son, Sam (played by Garrett Hedlund), who grudgingly begins looking into his father’s disappearance and finds himself transported into the digital world of Tron.

Lo and behold, his father, the Big Lebowski, who has been missing for a quarter century, is there. Together, father and son fight evil computer programs to escape. 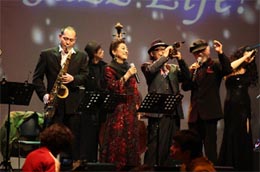 Music critic Nam Mu-sung gives us an intimate portrait of Korea’s first generation of jazz musicians and shows the struggles they went through to do what they love to do - music.

When he gets the news that his studio is going to close after 20 years, legendary jazz musician Lee Pan-geun decides to go on a trip to Bonghwa, North Gyeongsang.

He rounds up his friend, retired trumpeter Kang Dae-gwan, and a group of other older jazz musicians and together they set off.

While in Bonghwa, they talk about their lives as jazz musicians and do a small performance.

That sets the stage for the film’s main event, which is a concert organized by a group of younger jazz musicians in order to showcase the talents of their elders.