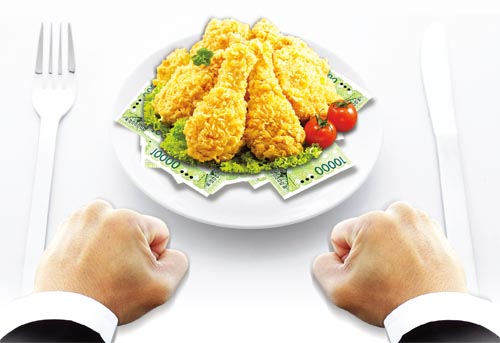 When a local discount chain announced it would stop selling its famously cheap fried chicken on Dec. 13, - just five days after launching - a memorial photo of the product, complete with a black ribbon used in funerals, quickly spread on the Web, symbolizing widespread consumer dismay over the decision.

Buckets of deep-fried chicken had never been taken so seriously until Lotte Mart’s Tongkeun chicken brand divided the nation early this month.

The controversy erupted after Lotte Mart grabbed headlines by offering 5,000 won ($4.50) buckets of chicken. The price was a fraction of what franchise chicken chains charged. It was featured on prime-time newscasts, and everyone seemed to have an opinion: politicians freely chimed in, business groups had their take, and even the president made sure to let the nation know where he stood.

Consumers, though, who voted with their feet by flocking en masse to purchase Lotte Mart’s discount chicken, now say they are the ultimate losers.

Customers unwilling or unable to pay over 15,000 won for a bucket of poultry at the nation’s numerous chicken franchises had welcomed Lotte Mart’s cheap chicken.

The bargain-basement birds were an overnight sensation. Customers lined up for hours to buy chicken that was one-third the price of (and most say just as good) BBQ or Kyochon’s - the two most popular chicken franchises. 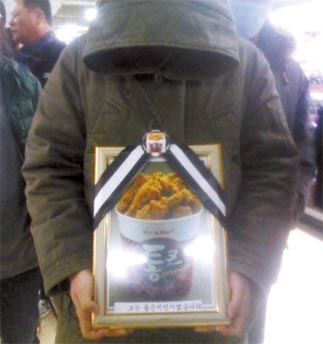 A man poses with a framed photo of chicken at a Lotte Mart in Daegu on Dec. 15. He adorned the memorial portrait, a common feature in Korean funerals, with black ribbons to express grief over the chain’s decision to stop selling the fried chicken. Lotte Mart began selling Tongkeun chicken for a third of the price at franchises, drawing the wrath of the mom-and-pop operations. After capitulating and pulling the chicken, many consumers were up in arms. [Captured from the Web]

After Lotte Mart caved into pressure from mom-and-pop outlets and ended sales of their discount chickens, petitions to bring back the Tongkeun chicken circulated on major Web portals. Boycotts were organized, and netizens flooded the Web with posts, satirical pictures and odes to their beloved Tongkeun chicken. The chicken gained a cult status usually reserved for girl bands and hot tech gadgets. Pictures of the chicken were uploaded to blogs, where they were shared, analyzed and admired.

The brouhaha spawned a new Korean word: “early adakter,” which is a compound of early adopter and dak, meaning chicken. Another word, chimaek, is a portmanteau of fried chicken and cold beer.

Economics professor Kang Sung-jin of Korea University said Lotte Mart’s reversal unintentionally made the chicken more popular. He said that Lotte did not take into account the momentum and backlash that would be created by the pro-chicken faction - who think their rights as consumers were violated - before it canceled its chicken sales.

“It is up to customers to make their own choices. Being denied the opportunity to choose to buy or not is what enraged them,” said Kang.

“Charging 5,000 won [for chicken] was sensational. Nevertheless, no one - not even the government - has the right to meddle in [free enterprise], if I have to judge it from an economics point of view,” he added.

The Korea Employers Federation suggests approaching the controversy from a social point of view, noting that Lotte Mart had made a positive social contribution by providing a highly-sought-after product for a dramatically lower price.

“There are people who couldn’t even think about having fried chicken because it had been priced out of their range - between 16,000 won and 17,000 won. For this reason, the 5,000 won bucket of chicken filled a void in the market,” said Kim Dong-wook, an economics research bureau director at the KEF.

“Chicken sales from Lotte Mart accounted for less than 1 percent of [national] fried chicken sales. It’s an exaggeration to say that Lotte Mart’s chicken posed a threat to the [smaller chicken chains]. Capitalism is all about selling better products at a lower price. Innovation. It’s just part of business,” Kim added. “If it was a loss leader, [the government] would have asked the Fair Trade Commission look into it,” but Kim pointed out that government regulators stayed out of it.

In the five days the chicken was on sale, each of Lotte Mart’s 82 branches were allowed to sell 300 fried chickens per day. As a way to cut costs, Lotte Mart did not provide complimentary side dishes, such as the standard pickled radish and soda, and no delivery service was offered.

Blogger Kim Woo-young, a 29-year-old graduate student in Iksan, North Jeolla, counts himself among those who think his consumer rights were violated when the fried chicken was discontinued.

Kim labels himself as a “fried chicken maniac” and gorges on the fried snack up to five times a month.

He said he lives within a three-minute walk from a Lotte Mart, but it still took him three days to get a bucket of the Tongkeun chicken.

“I’d been to the Lotte Mart twice, but they sold out before I got to the counter. The chickens were all sold out by 10:30 a.m,” he said.

On the third day, Kim and his girlfriend devised a plan.

“Most people eat fried chicken with a pitcher of beer in the afternoon. Why are people queuing so early in the morning, just so they could eat fried chicken later that day? Demand is sky-high, that’s why. I think Lotte Mart gave in too easily,” said Kim.

Koreans’ love for the greasy poultry made the Tongkeun chicken debate especially explosive.

According to a research paper issued by the Korean Franchise Association, fried chicken is one of the top three most popular franchises for entrepreneurs.

Kim Han-woong, a public relations official for the Korea Chicken Council, has a theory as to why Koreans love fried chicken so much.

“The first beast we domesticated was the chicken ... It means that we feel friendly toward chickens,” he said. “In addition, it’s not something you can easily make at home. It’s also convenient because it’s delivered practically everywhere.”

The chicken council says Koreans’ chicken consumption has been increasing over the years.

“Despite the avian flu, which has broken out on and off here, chicken consumption has risen between 4 and 5 percent annually,” Kim added.


The chicken and the pizza

When it comes to Koreans’ favorite foods, the battle between discount giants and mom-and-pops has not been limited to the deep fryer. In August, E-Mart found itself under fire from franchise pizzerias when it began selling cheap pizzas.

But unlike Lotte Mart, E-Mart weathered the storm and refused to stop selling its popular pizzas because of high demand.

Why different outcomes for chicken and pizza?

Analysts say the nation’s fried chicken market, which is estimated to be worth between 4 trillion won and 5 trillion won, is dominated by franchises that charge very similar prices - from 14,000 won to 18,000 won per bucket.

Pizza prices, on the other hand, start at 5,000 won, and from all appearances, the industry is more competitive and prices more varied. Compared to fried chicken, the market for pizza also tends to be more static as fewer older people enjoy pizza.

A lack of competition in the fried chicken industry is something the Fair Trade Commission took on in early October - before the Tongkeun chicken fiasco erupted - when it embarked on an investigation to find out if franchises collude to set prices.


A matter of presidential concern

President Lee Myung-bak, who has been trying to change his pro-business image, saw the chicken fracas as an opportunity to appeal to main street Koreans.

Lee planted himself firmly on the side of consumers when he mentioned that fried chicken franchises were too expensive at a Blue House meeting last week with high-ranking officials.

Responding to a barrage of blame, chicken franchise owners have given the public a glimpse of their books, claiming that their profit margin on a 15,000 won bird is 3,000 won.

An association representing the franchises last Friday tried to deflect criticism over its members’ prices by claiming that popular products such as coffee, steak and samgyeopsal are overpriced and that restaurants and chains make profits up to 30 times the costs of the raw products.

At Hanaro Club the next day, a silver-haired Lee Jung-soon, 79, said the bottom line was price and quality.

She was trying to decide between two different kinds of fried chicken in the Chang-dong outlet in northern Seoul.

Rather than ordering fried chicken to her home, Lee braved sub-zero temperatures to come to the discount store instead.

“It’s cheaper than the franchises, but it still tastes good,” she said.