It’s the story that makes the statue

It’s the story that makes the statue 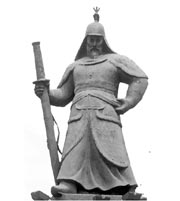 There is something about the greenish-blue color of verdigris that gives bronze an air of sadness. Perhaps it is the tragic history of the age that got its name from the metal. Although the Bronze Age put an end to the Stone Age and established a flourishing civilization, it wasn’t long before it was replaced by the Iron Age.

The short-lived era also lent its name to the title of a sculpture by Rodin, “The Age of Bronze,” which depicts a defeated soldier. From the sorrow of defeat, the sculptor might have been reminded of the tragic history of the Bronze Age.

After all, what is important for a bronze statue is the story behind it. Of course, its artistic value and historical significance are important, but it gains vitality when it creates a story of its own. Although Rodin’s monumental statue of Balzac was rejected by the literary society that commissioned it, the work later became the source of many stories. Another statue, the Manneken Pis by Jerome Duquesnoy, in Brussels, Belgium, is only 60 centimeters (24 inches) high, but it became a tourist attraction in part because of the legends behind it.

Most of the statues created during the later half of the 18th century were militaristic. The statues of Admiral Nelson of Britain and Emperor Napoleon of France are examples. They are at the crossroads of a nostalgia for the glorious past and a longing for the splendid future.

It is the same with Korea’s statues of Admiral Yi Sun-sin, which are found at around 3,000 places nationwide. The one at Gwanghwamun, which is the most prominent of them all, returned to its original place yesterday after a thorough cleaning and polishing. During the 40-day period, a notice that the statue was “changing clothes” was displayed in its place.

When it was decided the statue would undergo repairs at a workshop, three different reasons were proposed for its absence from Gwanghwamun. One of them was “under operation.” But it was dropped because it was not proper to say that the statue was under operation. Another one was “on vacation.” But it was also dropped because it stood out too much. They finally settled on “changing clothes.”

Of course, there have been controversies about it. Some people claim that the armor is Chinese, and others say that the sword is Japanese. Some insist that only a defeated general holds his sword in his right hand. But these stories are all part of the process of establishing the statue’s historical significance.