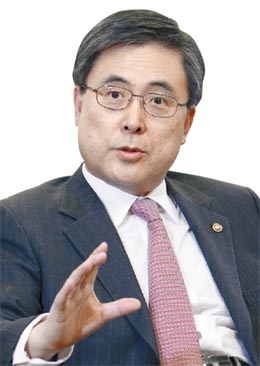 In a recent interview with the JoongAng Ilbo, Chin Dong-soo, chairman of the Financial Service Commission, said the government will not give up its demand for a premium price for a controlling stake in Woori Financial Group. He said a premium is necessary so that the government can recover the funds it spent to revive the financial group. Earlier this month, two consortiums affiliated with Woori Financial decided to abandon their bids because they complained about the premium and other costs associated with the bid. Their withdrawal led to the government deciding to suspend the privatization.

Chin also spoke about the collapse of the sale of Hyundai Engineering & Construction to Hyundai Group and the recent management crisis at Shinhan Financial Group.


Q. What went wrong with the privatization of Woori Financial?

A. It was really a pity. It was impossible to have valid competition because all the strong candidates backed out. The decision to suspend [the process] arose from the judgment that the bidding process could not continue in this manner. If a firm direction doesn't exist once strong candidates have deserted, there is more uncertainty as well as the chance that other interested parties will incur unnecessary costs.

Did you know that the consortiums affiliated with Woori Financial would withdraw their offers?

There were signs. The government continued to speak of [its need for] a management rights premium [selling a controlling share for a higher cost than market price], while they [the Woori Financial consortiums] maintained that it would be difficult. In the end, they withdrew their bids.

Will the privatization of Woori Financial be abandoned?

Woori Financial was originally a private bank. There was a view that overseeing such an institution as if it were a public enterprise and regulating it as such runs the risk of undercutting its value as a commercial bank - so it was decided to sell [the government’s share]. If a strategic investor that can skillfully manage Woori Financial buys it, we could accomplish both goals of recovering public funds and achieving private management. And that thought hasn’t changed. It’s just that the previous method didn’t pan out, and now it is time to discuss a new way to achieve those goals.

Talk of selling the bank in tranches is already surfacing in the market.

It’s too early to say. That’s a matter that could be decided - for or against - after the matters that I already described are discussed and it’s time to hammer out details.

It seems that the bid for Woori’s privatization was cut short this time because of the matter of the premium.

A. The maximum recovery of public funds is a responsibility specified in the law. Therefore, we cannot refrain from discussing a management rights premium. We could have attracted investors for mere profit, but there needs to be a clear source of operational management as well. There are some who advise against focusing too much on the recovery of public funds, but we can’t do that. How can we abandon the management rights premium after public funds taken from taxpayers were injected into Woori?

Since the separate sale of Woori Financial’s Kyongnam Bank and Kwangju Bank were canceled as well, regional banks that were interested in their acquisition are in an awkward position.

We were clear on that point before we began accepting prospective bids, in that we will decide whether to spin off [Kyongnam Bank and Kwangju Bank] only after the blueprint for the sale of the main body of Woori Financial has been set. However, that prerequisite was not fulfilled this time.

The sale of Hyundai Engineering & Construction continues to cause controversy.

We cannot forget the lesson of Daewoo Engineering & Construction. At the time of Daewoo E&C’s sale, a contract was signed that put an undue burden on the buyer to maximize the sale’s profits, which ended up causing trouble for the seller as well. With the sale of Hyundai E&C, we tried to review elements other than price, but we were unable to check the financing problem [the fact that the French unit of Hyundai Merchant Marine, which was worth 3.3 billion won, was able to borrow 1.2 trillion won] that the market found hard to accept.

Some question why sources of financing must be looked into in a private sale such as this.

If a “winner’s curse” appears through the buyer taking on an excessive burden, not only does it become a burden for financial companies but it becomes one for the economy at large as well. Actually, if the board of directors, stockholders or creditors of the firm that sought to acquire [Hyundai E&C] clearly knew about this burden, brakes would have been put on [the bid] - but they weren’t.

But the owner of a company is free to make a variety of decisions.

That’s why there exists the corporate restructuring agreement [between a company and its creditors]. There needs to be a device put in place to check whether an acquisition bid put into motion by just a few company officials is free of problems. I regret to see that Hyundai Group failed to keep its promise of entering into such a restructuring agreement last year. If an agreement had been signed, the group of creditors could have checked the financing problem.

How can we keep such a problem from happening?

We also agonized quite a bit over this matter. Through lessons gleaned from Daewoo E&C and Hyundai E&C, I believe there is now a consensus that a winner’s curse must be prevented in the course of an M&A. We are reviewing whether there is a systematic solution to prevent this.

Representatives of other countries that I met during the G-20 Summit expressed astonishment at the fact that a bank’s problems were taken to the prosecutors, instead of handling the matter through discussion with financial supervisors. Shinhan has been performing well by creating its own corporate culture, but in the end a “CEO risk” has surfaced. Next year, when we propose laws to regulate the corporate governance of financial firms, we seek to put in certain elements crucial to the improvement of corporate governance.

How will the evaluations proceed for Hana Financial Group’s incorporation of Korea Exchange Bank as a subsidiary as well as Lone Star’s continued status as a major shareholder?

Factors such as financing details must be looked at. We will try to reach a conclusion about Lone Star’s ability to remain as a major shareholder when we evaluate the incorporation [of Korea Exchange Bank into Hana Financial].
What projects will you emphasize next year?

Fundamentally, market stabilization is the most important responsibility of financial policy. It is my intention next year to prepare an advanced infrastructure and encourage the financial sector to become more competitive as an industry. Consumer protection will be stepped up, and financial firms will be directed toward a more advanced corporate governance structure. If this year’s goal was to revitalize financial services for low-income citizens, next year’s will be to increase their quality and stability.

In [the FSC’s] policy plans for next year, reducing household debt is mentioned extensively.

It’s not [so extensive] that it will endanger the financial system. The problem of a rapid increase in mortgage loans remains - and although currently things are all right since interest rates are low, as soon as they rise the burden of paying off the principal becomes heavier. Moreover, most [mortgage loans] in Korea have variable rates and remain unredeemed for long periods, with people just paying interest. And those who take out loans don’t often choose fixed rates because they focus on immediate benefits. This is why we will try to induce fixed-payment loans and fixed rates instead of fixed principal loans.