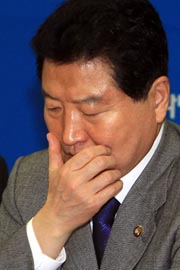 The opposition Democratic Party seized another opportunity yesterday to attack Ahn Sang-soo, Grand National Party chairman, over his slips of the tongue, with women lawmakers demanding he resign over a sexually inappropriate remark.

A group of 13 women lawmakers from the Democratic Party held a press conference yesterday and demanded Ahn step down as ruling party chairman and as a lawmaker.

Ahn was criticized for remarks made on Wednesday during a luncheon with journalists. After visiting a facility for physically disabled children in Yongsan, central Seoul, Ahn had lunch with three women reporters and discussed plastic surgery and young female singers.

Ahn said, according to the journalists present, “When people go to room [salons], they tend to go for girls who are natural. Those who have had extreme plastic surgery are not popular, while the natural girls are more favored.”

A room salon is a type of expensive establishment in Korea that provides pricey drinks and companionship from young hostesses.

“Ahn’s remarks were the essence of insult against women,” said Cha Young, DP spokeswoman. “It is an insult to all women in Korea. Ahn must step down from his leadership post.”

As criticism mounted, Ahn told the JoongAng Ilbo he had no intention to insult women, but he was sorry for prompting a misunderstanding.

This week’s incident was Ahn’s second slip of tongue in less than a month. During a Nov. 24 visit to Yeonpyeong Island after it was shelled by North Korea, Ahn mistakenly held a blackened thermos bottle, showed it to a television reporter and said, “This is a shell.” The scene was aired on YTN on Nov. 30.

In addition to the women lawmakers’ press conference, other DP leaders made Ahn the butt of jokes yesterday.

During a party meeting, DP floor leader Park Jie-won joked, “I want to ask him if there is a natural thermos-bottle shell.”

“I strongly support Ahn keeping his job,” he said.

Some young GNP lawmakers worry that under Ahn’s leadership the party will be incapable of preparing for parliamentary elections in April.

Others, however, said it’s unlikely the GNP will oust Ahn only five months after his inauguration. If Ahn steps down, the party would have to hold another leadership election, but the political schedule is tight because there is a legislative election on April 11.