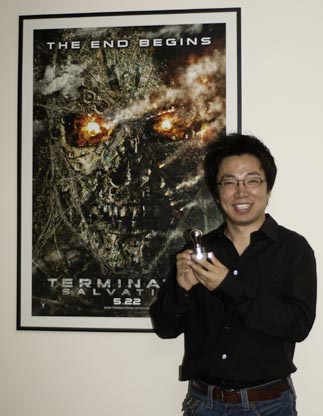 Kim Ki-bum stands in front of a poster of “Terminator Salvation.” Provided by Kim Ki-bum

When George Lucas laid down the foundation for what would become Industrial Light and Magic in 1975 - to create the visual effects for “Star Wars” - he probably never imagined how big the industry would become. Now, computer graphics and visual effects are essential to most of the movies we watch today.

ILM is now a leading visual effects company, earning its reputation through the “Star Wars,” “Indiana Jones” and “Pirates of the Caribbean” series’ and garnering 15 Academy Awards for best visual effects in the process.

In 2006, it opened its first overseas branch in Singapore to expand internationally.

And recently, Lucas’ production company, Lucasfilm, participated in Siggraph Asia 2010 in Seoul, where it interviewed Korean artists hoping for a chance to work on one of the internationally recognized director’s films.

One Korean who is already living that dream is Kim Ki-bum, a digital artist who specializes in lighting computer-generated objects at ILM Singapore.

Kim had always wanted to be in the movies. So after working at a computer animation company in Korea, he went to work for Younggu-Art Entertainment, where he helped craft “D-War” (2007), a fantasy action film that set audience attendance records in the first days of its release in Korea. But Kim was looking for bigger opportunities, and when the chance to work for ILM presented itself, he jumped at it.

Since moving to ILM Singapore three years ago, he has worked on “Transformers: Revenge of the Fallen,” “Terminator Salvation” and “Iron Man 2.”

He recently sat down with the Korea JoongAng Daily for an exclusive interview on what’s going on in the industry and where he is headed in the future.


Q. You’ve had five years of experience in the industry in Korea. What made you want to go abroad?

A. I had always wanted to work in film, and back then, the “D-War” project was the only chance for me to work on 3-D character rendering. I also wanted to work abroad in a strong and well-established production unit. Although Korean and foreign artists’ actual skillsets did not differ greatly, there was something emotionally touching about movies like “Transformers” and “Lord of the Rings,” and I wanted that quality in the work I did. But my five years of experience in Korea was not much compared to the artists at ILM who have more than 10 or 15 years of experience.

So have you found what you were looking for?

Not yet. I guess that’s because I haven’t yet gotten to the point of working on the main shots with a main character.

But with “Terminator Salvation,” I remember the moment when the movie was finished, after our work was screened daily hundreds of times at the office, and the credits went up with my name and my colleagues were clapping with joy. I did feel that emotional something that keeps me going.

How do things work at ILM Singapore, given the huge time difference between Singapore and the United States?

The headquarters in the United States works very closely, and simultaneously, with the Singapore unit, so we don’t feel the time difference that much.

You could say that ILM is a company that goes on nonstop for 24 hours a day because of the time difference. The company is well structured and we have several video conferences per week, even though our morning is the time when people usually get off work in the U.S.

“D-War” was one of the most controversial films in Korean history, because of the amount of time and money involved in its production and the negative reception it had in the United States. What was the experience like for you?

One of the surprising things for me was that I received a fairly good evaluation for the work we did on “D-War.”

I honestly thought that the movie was not that entertaining and the quality of the computer graphics could have been much better.

But the people involved did their best, given the huge amount of work we had to do in such a limited time. Still, I’ve had a lot of good feedback on the CG in “D-War.” Because the movie was in the middle of so much controversy, there were a lot of people who went to see it for themselves.

Why do you think that Korean audiences are more generous toward films from overseas than they are with Korean films?

Foreign countries such as the U.S. have a long history in computer graphics and animation. They have well-structured production units, even though some of these tightly produced movies fail sometimes.

In Korea, where the production unit is not well-structured in terms of schedule and division of labor, it would be a miracle if Korean movies were to do as well as Hollywood movies in terms of popularity.

However, I still feel that the Korean computer graphics industry has great potential, because movies such as “Jeon Woo Chi: The Taoist Wizard” and “The Restless” have received great evaluations even from my supervisors.

What’s up next for you and what are your dreams for the future?

I think about my dreams a lot. First, I wanted to work at a computer graphics company, so I did. Then, I wanted to be in the movies, so I worked at Younggu-Art Entertainment. Then I dreamed about working on a movie like “Transformers” and I became involved in the second and third films in the series.

My first dream would be to work my way up within the company and become someone who makes crucial decisions but is also someone people can respect. The other would be to return to Korea after many years of experience, form a team and work on something special that will be nominated for an Academy Award for Best Visual Effects.

I feel that such things aren’t impossible and, with so many skilled artists in the Korean entertainment and film industry, I feel that our potential is great.