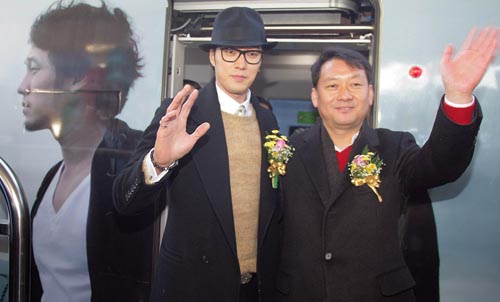 Actor So Ji-sub, left, the honorary ambassador for Gangwon, and Gangwon Governor Lee Kwang-jae pose in front of the new “Korean Wave Tourist Train” showing So’s picture, at Chuncheon Station in Gangwon on Saturday. The train began running between Seoul and Chuncheon on a newly opened double-track line on Saturday and will operate on weekdays. It will offer various performances on board and will stop at tourist spots. [YONHAP]