Expats use Christmas to raise funds for North

Expats use Christmas to raise funds for North 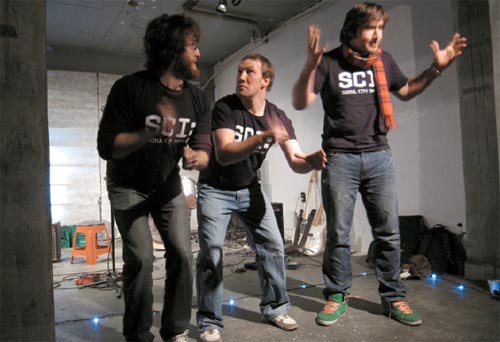 
Laurene Walker imagined what she would be doing if she had stayed at home in Texas this Christmas season: Preparing holiday meals, opening presents, playing board games and sharing love with friends and family.

Instead Walker celebrated the concept of sharing and hosted a fund raising event for North Koreans on Christmas day.

Around 50 people -- expats and Koreans alike - joined Walker at the Yogiga Expression Gallery near Hongik University, Seoul, on Saturday night.

The performances by eight expatriate groups were mostly musical, although Seoul City Improv, an expat theatrical group, specialized in comedy in the vein of “Whose Line Is It Anyway?”

Walker said the ticket price of 10,000 won ($8.70) will be spent on donations for North Koreans in need either in North Korea or China. Music CDs, craft items and beverages were also on sale at the event and the proceeds will go to North Koreans.

According to organizers, the proceeds from the last year’s event, which totaled 700,000 won, was sent to an orphanage in China taking care of North Korean children.

Around half of the audience Saturday was made up of South Koreans. Walker said she hopes South Koreans won’t lose their compassion for North Koreans despite recent provocations from the military regime.

“The average North Korean person has no choice but to be in the military or to obey Kim Jong-il’s commands,” she said.

Dan Bielefeid, a volunteer for Justice for North Korea, said many foreigners are surprised at South Koreans’ lack of interest in human rights issues in North Korea.

Human rights in North Korea is directly related to South Korea’s security concerns, he said, citing former Soviet dissident Andrei Sakharov, who said that a country that violates the rights of its own people cannot be expected to respect the rights of its neighbors.

“If we do not pay attention to human rights issue in North Korea, South Korea is not safe,” he said.

All the performers including American Jenna Rae, performed for free. Rae said she wanted to be part of the event because it was a chance to become involved in North Korean issues.

Many people in the audience attended even though they had to sacrifice a normal holiday with friends and family.

“I heard that this is the coldest winter in decades in Korea,” Murphy said. “There are a lot of less fortunate people in the world and very few people are less fortunate than the North Korean people.”

One of the songs sung at the event was “Imagine” by John Lennon. Sato Yukie, a Japanese musician and friend of the owner of the Yogiga Expression Gallery, played the tune on his guitar himself and sang the lyrics that urge to imagine an ideal place in which there is no need to kill, no need for hunger and a brotherhood of man.

“It’s been almost 40 years since this song came out, but there are still people discriminated against,” Yukie said in Korean. “I think this is the reason this song needs to constantly performed and played.”

At his prodding, many in the audience joined him singing the song’s well-known refrain:

“You may say I’m a dreamer/

But I’m not the only one/

I hope someday you’ll join us/

And the world will live as one.”