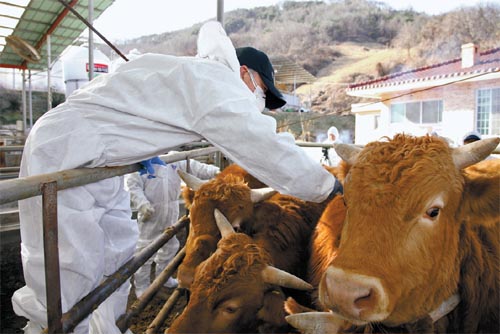 A health-authority official vaccinates cattle against foot-and-mouth disease at a farm in Andong, North Gyeongsang yesterday. The government began the vaccinations Saturday, but the epizootic spread further around the country. [YONHAP]


The Grand National Party is pushing for integration of inspections and a single government body to oversee the deadly foot-and-mouth disease (FMD) after two additional outbreaks of FMD at pig and cattle farms were confirmed by health authorities yesterday.

“The GNP will come up with measures to effectively contain the disease,” he said. “And it will also encourage the public’s consumption of beef and pork because an outbreak of FMD doesn’t affect food safety.”

The Ministry for Food, Agriculture, Forestry and Fisheries said yesterday a pig farm with 2,100 pigs in Yeoju County, Gyeonggi tested positive for the disease. All animals on the farm and within a 500-meter (0.31-mile) radius were slaughtered to prevent the disease from spreading.

Of 140 cows raised at a cattle farm in the same county, two tested positive as of yesterday afternoon and are also slated to be culled, according to the ministry.

In addition to the Yeoju farm, the ministry received a report of a suspected FMD case at a farm with 5,000 pigs in Icheon, Gyeonggi, raising concerns among health officials and area residents.

Despite the government’s efforts to eliminate the disease by vaccinating cloven-hoofed animals beginning Saturday, health officials are facing another obstacle: disinfectants have been freezing in the recent cold spell and can’t be sprayed to help prevent the spread of FMD.

The Korean government had refrained from using the vaccine because doing so would make it more difficult for Korea to regain its FMD-free status, which is necessary for exports.

Since the outbreak of the disease on Nov. 29 in North Gyeongsang, it has spread to Gyeonggi, Gangwon and Incheon. There have been 51 infections reported and more than 325,000 livestock have been ordered to be culled. The Agriculture Ministry estimated losses related to the disease at around 400 billion ($347 million).

The worsening situation is forcing local governments to cancel or suspend their long-prepared celebrations for the first sunrise of 2011, an annual event held by many communities in Korea.

North Gyeongsang, which has lost the most livestock from FMD, decided to cancel all such events.

Some events that have been canceled include the Yeongdeok Sunrise Festival, organized by the Yeongdeok County Office, and a bell ringing ceremony to mark the new year, organized by the North Gyeongsang Provincial Government. Cheongwon County in North Chungcheong decided to cancel its year-end concert and will offer refunds on purchased concert tickets, officials there said.

President Lee Myung-bak yesterday ordered winter gloves, earmuffs and other winter-protection clothes to be given to farmers and government officials combating the disease after he was briefed by his Presidential Chief of Staff Yim Tae-hee about current FMD countermeasures.