The kid who helps homeless kids

The kid who helps homeless kids 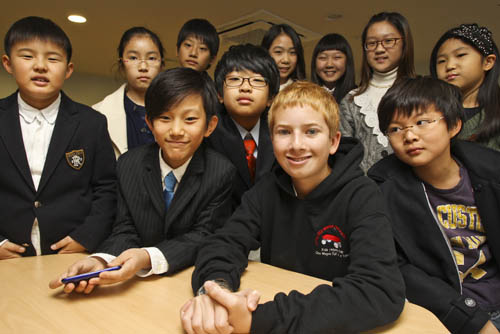 Zach Bonner, a 13-year old American philanthropist, meets with Korean children who will accompany him on a fund-raising trip to Africa. By Cho Yong-chul


At the tender age of 13, American Zach Bonner is already a well-known philanthropist who’s been to the White House. The founder of the Little Red Wagon Foundation Inc. visited Seoul last week and met with 13 Korean children who dream of being just like him.

Bonner began his foundation at the age of eight to help homeless children. Since he started his first charity trek from Tampa, Florida, to Tallahassee in 2007, he has made headlines for his unique way of raising money. He walks, meets people and asks for donations. Eventually, his treks became “My Walk to the White House,” and he left Atlanta, Georgia, in May 2009 pulling only a small red wagon. He eventually reached the George W. Bush White House in July 2009. On his journey, he collected $50,000, including $25,000 from British singer Elton John.

In Seoul, Bonner meet with 13 Korean children at a charitable organization called Plant A Seed, which has similar goals as the Little Red Wagon Foundation. The organization recently published a book and donated the royalties to child patients at the Korea Muscle Disease Foundation in Seoul.

The organization invited Bonner to participate in a book launch ceremony. Bonner said he will walk with the 13 Koreans in either Swaziland or Rwanda in 2011 to raise donations to build a soccer field for local children.

In an interview with the JoongAng Ilbo in Seoul, Bonner, who doesn’t attend school but studies from Internet classes, said he feels happiest when helping children in need.


Q. You’ve been helping homeless children since you were eight years old?

A.In 2004, my hometown, Florida, was hit by Hurricane Charley, and many children became homeless. I was thinking about what I could do for them and gathered clean water bottles in my red wagon to give them to children in need. From that experience, I thought, “Even though I am a small child, I can help other children in need.”

Is it really possible for a child to help other children?

Children can understand what children want. Homeless children need not only daily necessities but also toys and candy bars. I want to give them more than bed and bread. Whenever I visit orphanages and hold a Christmas party for children, I always ask what they really want. Children without homes look wily and tough, but actually they are missing the love of family and ordinary life at home.

What makes you the happiest?

It’s when I meet kids who recover a smile on their faces because of our help. Have you ever seen the smile of a child who gets a toy for the first time in his life? His smile is really priceless.