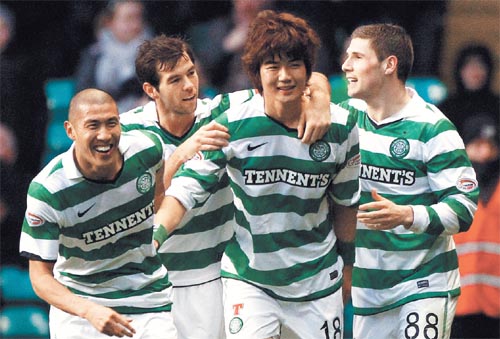 Celtic’s Cha Du-ri (left) and Ki Sung-yeung (second from right) scored to lead Celtic to a 2-0 win over St. Johnstone during their Scottish Premier League match on Sunday. In this file photo, Ki and Cha celebrate after scoring against Inverness Caledonian Thistle on Nov. 27. [REUTERS/YONHAP]

The victory keeps them two points behind rivals Rangers at the top of the Scottish Premier League.

The Rangers earned an easy 4-1 game away at Motherwell.

Cha scored a wonder goal to claim his first for Celtic before fellow Korean international Ki scored a break away goal three minutes into injury time as the Hoops ended a run of three successive draws at home in the league.

“It was a very frustrating day up until the first goal went in. We had to wait a long, long time for that but I’m delighted for them,” Celtic manager Neil Lennon said.

“It could have been a more disappointing day really but two great goals to end up what was a very happy finish for us.”

Lennon admitted his Scottish Premier League giants will be hit hard when South Korean duo Cha Du-ri and Ki Sung-yeung miss a month of the campaign because of January’s Asian Cup.

“But I’m delighted with their two performances over the last couple of months and we will miss them.”

The pain of losing the pair may be softened by news that former Arsenal and Sweden midfielder Freddie Ljungberg will train with the Parkhead club.

“He had a horrendous time with injuries at West Ham but the last 18 months he has played a lot of games in America.

“You never lose that quality and he might just have something that we need. He has been a quality player for a long, long time and he is vastly experienced.

“I felt we defended with a confidence and discipline about us. I thought we certainly frustrated Celtic,” he said. “Any late goal against you is a hard one to take but when they come against good teams like Celtic it’s even harder and that’s why we are very disappointed.”

The Celtic defense had failed to keep a clean sheet in their previous three matches. In a nervy start, a mistake from Daniel Majstorovic presented St. Johnstone with a chance within 30 seconds.

The Swede’s misplaced header allowed Colin Samuel in, but his first touch was heavy and under pressure from Fraser Forster. He fired wide.

The hosts failed to make an impression on the match until the 17th minute, when Paddy McCourt’s downward header from a Niall McGinn cross went just wide.

McCourt’s trickery was causing St. Johnstone problems all night. Immediately after the break, the Northern Ireland international went on an inspiring run, but an out-streached Peter Enckelman caused him to shoot wide. The ineffectual Georgios Samaras was replaced on the hour mark by Anthony Stokes, the Greek’s last contribution being a free-kick which he won on the edge of the box that Ki sent straight into the wall.

Celtic were screaming for a penalty in the 76th minute when Murphy went down under pressure in the box, but referee Calum Murray waved away their protests.

In the first minute of injury time, Celtic made its breakthrough when Cha lifted an angled shot from 25 yards into the top corner. Soon after, Ki raced clear on a quick counter-attack to fire the ball into the roof of the net to seal the three points.

Elsewhere, veteran Kenny Miller scored a double in the Rangers’ win over Motherwell.

Miller opened the scoring midway through the first-half, before a Steven Saunders own goal doubled their advantage at the break.

Substitute John Sutton pulled one back immediately after the break, but further goals from Vladimir Weiss and Miller sealed the win.

Aberdeen ended its seven-match losing streak and moved off the bottom with a 2-1 away win over Hibernian in Craig Brown’s first match at the helm of the club.

Inverness is fourth despite losing 2-1 to St. Mirren.