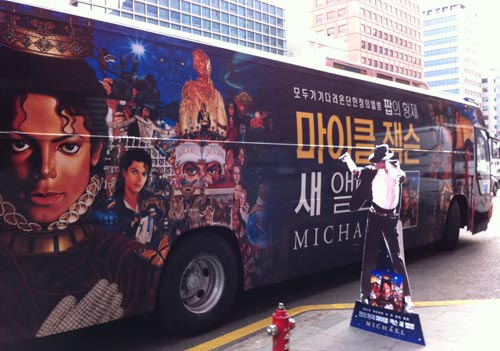 A bus displaying a picture of the cover of Michael Jackson’s first posthumous album, “Michael,” has been touring around Seoul since the album’s release on Dec. 14. Korean fans are divided over the release of the new, unfinished, songs. Provided by Sony Music Korea


In Korea, where teen idol bands with acrobatic dances and pretty faces dominate the domestic music scene, Michael Jackson is still a force to be reckoned with.

Almost 30,000 people belong to two Web-based fan clubs called “Moonwalker” on Naver and Daum, the nation’s two major portal sites. Through gatherings online and off, they celebrate the King of Pop’s birthday, mourn his untimely death one and a half years ago and pay tribute to him through performances and exhibitions. Most recently, they have been sharing their thoughts about his first posthumous album, “Michael.”

“Michael” was released around the world on Dec. 14 and instantly became the top-selling global album of 2010 and went platinum in the first week after its release. More than 3 million copies had been shipped across the globe as of late last week.

Sony Music Korea received 10,000 pre-orders for the CD and had sold 12,000 copies as of yesterday - a notable figure for the local music industry, where the majority of consumers now buy their music online. The album has remained at the top of key online music charts such as Hanteo and Kyobo.

Despite the flood of album sales, Michael Jackson fans appear divided over the album, which is a compilation of unfinished songs left behind by Jackson but completed by his producers. It has 10 tracks and is 42 minutes in length, or about 30 minutes shorter than his previous studio albums.

Some fans say they are simply grateful for access to the late singer’s vast musical archive, which may not have been available had it not been for his death in 2009.

Others are more wary of the motivations behind the album’s release.

“I think it [the album’s release] is a highly commercial act,” said Seong Ha-gyeong, 37, an employee with a major corporation. “But it is the only chance for fans to listen to his unreleased songs.” 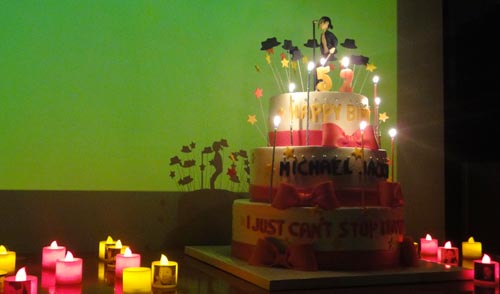 
Seong, who has been a Michael Jackson fan for the past two decades, added, “Since he is a public figure, depriving fans of the right to listen to the tracks just because he didn’t release them while he was alive would be regrettable. I think the general public is entitled to have access to his unreleased songs.”

Lee Chang-jun, who has led a Michael Jackson fan club at Naver for six years, agrees.

“Despite the slew of controversies [surrounding Jackson], most of his fans have been waiting for a new album for a long time,” he said, referring to the rumors about Jackson’s physical appearance and accusations of sexual abuse - of which Jackson was later acquitted.

Lee said that from a global perspective Korea has relatively few Michael Jackson fans, but that the release of “This Is It,” the 2009 film documenting rehearsals for Jackson’s comeback shows at the O2 arena in London, helped boost the number of Jackson fans here.

Some fans believe that the album’s release would have gone against the singer’s will.

One fan-club member nicknamed “queen6302,” said, “I am against all albums that were not completed by Michael Jackson. I would say that the tracks in the new album are completely fake. Jackson would not have approved any of them. I want to give him relief by not buying his posthumous albums.”

Fans are not the only ones who are angry with the seven-year deal between the Jackson estate and Sony Music, which is reportedly worth about $250 million.

In November, Black Eyed Peas mastermind will.i.am told Rolling Stone “that Jackson was such a perfectionist about his songs that releasing any of them without his approval would dishonor the singer’s memory.”

Still, the new album has stirred excitement among Korean fans who claim they hear “Yeobosaeyo” - a Korean phrase for “Hello” when speaking on the telephone - 20 seconds into the fourth song, “(I Like) The Way You Love Me.”

Sony Music Korea says it is still waiting for confirmation from the Michael Jackson estate about whether the phrase was Korean and, if so, intentional. The track starts with Jackson saying, “Hey, this is the tempo and this is the melody” and switches to vocal beatboxing.