Robot teachers with a human face

Robot teachers with a human face 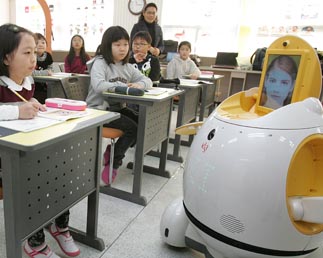 “Engkey” gives a lecture yesterday in Daegu. By Gong Jeong-sik

After years of hype, robot teachers have finally rolled into the classrooms.

The Daegu Office of Education introduced 29 robot teachers for English classes in 21 elementary schools - one of the largest rollouts in the world - and the bots strutted their stuff at a demonstration at Hakjung Elementary School yesterday, with about 150 government officials coming to get a look at the technology employed.

The 1-meter (3.28 feet) egg-shaped robot, named “Engkey” (an abbreviation of English key), spoke, asked questions and conversed in English with students, and even entertained the crowd by dancing to music.

“It is awesome and interesting,” marveled Sim Geun-hae, a third-grade student who participated in the demonstration class. “I felt I could learn English better [if it becomes my teacher].”

In fact, the robo-teachers aren’t mere chips, wheels and gears. Within each of them, in a sense, is a real human teacher controlling the machine by remote from the Philippines. The teachers in the Philippines have cameras to record their faces - which show up on a flat panel screen that forms the robo-teacher’s face - and they can also see the Korean students through a camera installed in the robot. Basically, the robot is a rolling Internet link between students and teacher, although the human teacher can also command the robot to make human gestures with its arms and wheels.

“The robots will teach students in after-school programs, not in regular classes,” Kim Mi-yong, an official at the education office, said. “The robot can handle only a small number of students per class, about eight students.”

The education office said Korean teachers can use the robots as assistant teachers for English classes, too.

The robots were invented by the Center for Intelligent Robotics under the Korea Advanced Institute of Science and Technology, and the Daegu city government, the Daegu Office of Education and the Ministry of Knowledge and Economy spent roughly 1.6 billion won ($1.39 million) for the units.

The English-speaking robot has already made headlines in the foreign media. Time magazine dubbed it one of the 50 best inventions of 2010.

“If students like the robots, we will distribute more to other schools gradually,” an official at the Daegu city government said.

The Center for Intelligent Robotics said yesterday that the robots will be helpful for children living in rural areas where foreigners are reluctant to live. “We will continue to study to improve its teaching ability until it’s very close to that of real human teachers,” Kim Mun-sang, the center’s chief, said.