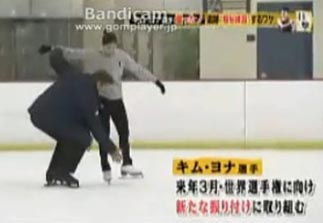 The Seoul-based agency for figure skater Kim Yu-na said on Tuesday it has lodged a complaint with a Japanese television station for airing hidden camera footage of the skater’s practice in Los Angeles.

On Sunday, Nippon TV aired some secretly filmed shots of Kim, the Vancouver Winter Olympics gold medalist, in training at East West Ice Palace in Los Angeles. She was seen doing strength exercises and later dining at a restaurant.

Figure skaters’ practice sessions are usually held behind closed doors to prevent competitors from getting wind of their programs and choreography.

Kim has not skated competitively since finishing second at the March world championships in Italy and only announced the music for her short and free-skate programs for next year’s competitions one month ago.

An official at All That Sports, Kim’s agency, said the management company registered “a strong complaint” with Nippon TV.

“We told them that we would take necessary measures if something similar happens again in the future,” a representative from the agency said. “We believe the footage was shot around Dec. 20 and fortunately, there was nothing on the new programs [in the footage].”

Kim, who made ice-show appearances over the summer, will return to competitive skating at the 2011 Tokyo World Figure Skating Championships in March. Her short program will be performed to a theme from the classic ballet “Giselle,” and her free-skate music will be a compilation of traditional Korean music called “Homage to Korea.”

Nippon TV aired Kim’s footage on the same day that Mao Asada, a star skater from Japan, qualified for the world championships by finishing second at the Japanese Figure Skating Championships, thus setting up a showdown with Kim in March.

Asada had struggled all season and failed to qualify for the International Skating Union Grand Prix final. She needed to finish among the top three to have a chance to defend her world crown.

This will be the fifth meeting between Kim and Asada at the world championships. Asada won titles in 2008 and 2010, sandwiching Kim’s lone championship in 2009. Asada was a distant second to Kim in Vancouver, where the South Korean set the all-time high score of 228.56 points under the revamped judging scale.

Kim added another honor to her resume on Tuesday, when she was voted the United States Sports Academy’s female athlete of the year in an online ballot cast on the Web sites of NBC Sports and USA Today. She beat out two tennis stars, Kim Clijsters and Serena Williams, for the honors.