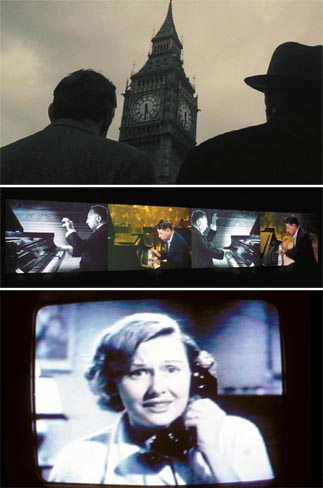 Contemporary art museums are often described as “white cubes” and, in fact, most of them are square spaces painted white so that the paintings and sculptures are well lit and stand out against a neutral background.

However, major contemporary art museums around the world have been adding black boxes to their spaces, to display multimedia works, video art and other works best viewed in the dark.

Two of Korea’s leading museums - the National Museum of Contemporary Art (MOCA) and Leeum, Samsung Museum of Art - have joined that trend.

The Leeum has actually had such a space for many years, but had never used it for a separate exhibition. Its “black box” floats 17 meters (55 feet) above the floor.

The space will be used for a new exhibition by renowned American media artist and composer Christian Marclay - the first exhibit of the museum’s “Black Box Project” - which runs through February.

“We have had the black box - designed by Dutch architect Rem Koolhaas for media art shows - since the museum opened in 2004,” said Park Min-sun, head of Leeum’s public relations team. “But the black box has never been used for a separate media art exhibition. To make the best use of the space and react to the emergence of media art, we will hold a black-box show by a renowned media artist each year from now on.”

The exhibition, “Christian Marclay: What You See Is What You Hear,” features three video pieces by the 55-year-old artist, who has created new sounds and transformed sounds into visible forms - and visible forms into sounds - for the last three decades.

Among the three pieces that are part of the exhibition, “Video Quartet” (2002) shows the role Marclay played as a disc jockey in the fine-art world over the years.

The work is a 17-minute-long video made of clips from more than 700 films, most of which are Hollywood classics. On each of the four screens installed in the piece, actors and actresses sing, play instruments, stamp their feet, break stuff, scream and do other things, making all kinds of sounds in the process. With the four screens emanating different sounds all at the same time, the video becomes a piece of music - a quartet, just as the title indicates.

“I prefer films [as ingredients for video works], because they are familiar,” Marclay told the press at the museum early this month. “But I hope viewers will focus on the music the film clips create, rather than on finding familiar movie scenes.”

Koo Kyung-hwa, curator of the show, says Marclay has succeeded in shifting the viewer’s eye.

“We commonly say we ‘see’ movies and other videos but with ‘Video Quartet’ Marclay has changed the priority in video, putting sounds above images,” Koo said. 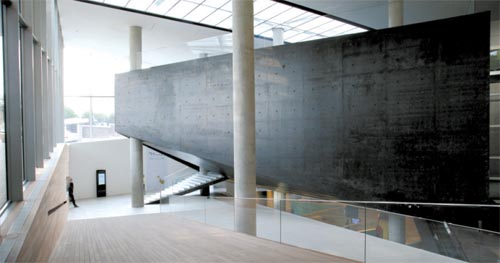 
The 24-hour-long “Clock,” an ambitious project, consists of scenes from thousands of films in which a clock or watch appears. The time in the video collage is always exactly the same as it is in real life; if you see a clock indicating 12:25 p.m. in the video, check your wristwatch. The two times should be the same.

“It will help you gain a new perspective on the time that you are in, and that constantly influences your life,” Marclay told reporters.

The artist said the project was very labor intensive. In all, it took nearly five years from conception and planning to completion. It took 28 months for him to edit all the clips collected by his assistants.

The video includes scenes from all kinds of movies, including old black-and-white films, recent Hollywood action films and films from other countries, including “Oldboy” by Korean director Park Chan-wook.

“Most film scenes of a clock or a watch not only show the time in the scenes but also act as turning points,” Marclay said. “So you will see the tension build as time flows into night, because scenes of a clock at night in movies tend to appear at critical moments.

“I regret that viewers cannot see the scenes as the museum closes at 6:00 p.m.,” he said, laughing. 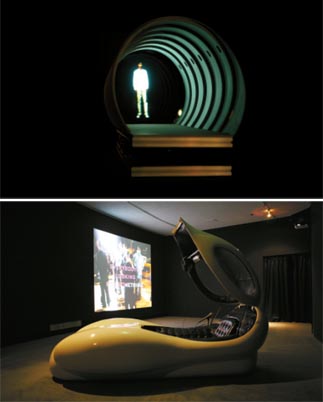 Yook Tae-jin’s “Tube Monitor” (2003) and Lee Bul’s “Eternal Life” are part of MOCA’s “Out of the Silent Planet” exhibit. Provided by the museum

Viewers will have one chance to see the entire film at a special 24-hour screening that starts at 7 a.m. on Friday and ends at 7 a.m. on Saturday, allowing museumgoers to celebrate the New Year with Marclay’s work.

Meanwhile, the National Museum of Contemporary Art in Gwacheon, south of Seoul, has recently opened a black box to exhibit media art. Its opening exhibit is “Out of the Silent Planet,” which continues through May.

The exhibition room actually looks more like a donut than a box, which is conducive to this exhibit. Walking through the rounded space is as if you’re traveling in the dark space along Saturn’s rings.

Another work in the exhibit is an installation by renowned artist Lee Bul called “Eternal Life.” Lee has created a karaoke room that looks like a spacecraft. There is even a karaoke list with well-known, sentimental pop songs. It’s like a cocoon for people looking to escape from reality.

“New media works have three characteristics that distinguish them from traditional works: light, sound and a particular relationship with time,” MOCA said in a press release about the exhibit.

*“Christian Marclay: What You See Is What You Hear” runs through Feb. 13 at Leeum’s black box. Admission is 3,000 won ($2.60) for adults. A day pass covering all permanent and special exhibitions is 14,000 won for adults.

“Out of the Silent Planet” continues until May at MOCA’s Round Exhibition Hall 2. Admission is free. The museum is open from 10 a.m. to 5 p.m. from Tuesday to Friday and until 8 p.m. on weekends. It is closed on Mondays. Go to Seoul Grand Park Station, line No. 4, and take the free shuttle bus, which runs every 20 minutes, or walk about 15 to 20 minutes to the museum.