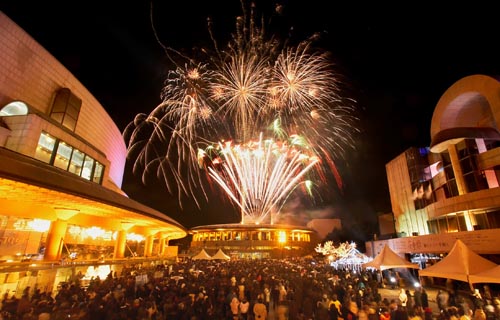 Seoul Arts Center’s New Year’s Eve Concert ends with a countdown to the new year and a fireworks show. The photo above is from last year’s event. The concert is just one of the many year-end celebrations going on in the city. See MUSIC, left. Provided by Seoul Arts Center

Today and tomorrow: The Korean National Opera presents encore performances from the previous season and previews of pieces from the company’s upcoming season.

Tomorrow: Mahler’s Symphony No. 3 will be performed by conductor Chung Myung-whun and mezzo-soprano Karen Cargill.

Thursday and Friday: This two-day event on two stages features a veritable who’s who from the indie music scene in Korea.

Friday: Singer-actor Rain is one of the biggest stars in Korea with six albums and a long list of film and television credits to his name, and he will close out 2010 with two year-end concerts on Dec. 31.

Friday: Soprano Sumi Jo and “Phantom of the Opera” star Brad Little headline this concert to ring in the new year.

Sumi Jo will perform Beethoven’s “Ich Liebe Dich” and other classics. Little will sing songs from “Phantom,” including “The Music of Night” and “This is the Moment.”

Friday: This annual concert features music and dancing to celebrate the new year. In the first act, a violin orchestra will play Faure’s “Pie Jesu,” Brahm’s “Hungarian Dance No. 1” and pop songs such as “When I Fall in Love.” In the second act, ballet dancers Kim Hyun-woong and Kim Ju-won will perform dances from “Swan Lake” and “Giselle.”

Jan. 9: Ryuichi Sakamoto returns for his first appearance in Korea since 2000. The concert features two pianos - Sakamoto will play one and the other will play recordings of Sakamoto’s songs.

The concert features songs from Sakamoto’s recent albums “Playing the Piano” and “Out of Noise,” both from 2009.

To Jan. 15: The legendary 72-year-old guitarist known in Korea as the godfather of rock presents a month of concerts. He chose Daehangno Small Theater because it was where he performed in 1960 at the height of his career.

To Friday: This play, performed by an all-Korean cast, attempts to give new meaning to motherhood.

The play is based the novel of the same name by Shin Kyung-sook. Shin’s book has sold more than 1.2 million copies and topped the best-seller list for much of 2008 and 2009.

To Friday: The Universal Ballet Company’s production of “The Nutcracker” uses the original 1892 choreography created by Lev Ivanov and designed for the Mariinsky Theatre in St. Petersburg, Russia. In this version, the children’s roles are performed by real children.

In other versions the children are played by adults.

“Mother Ginger and Her Children,” a dance from Act 2, is the most fun for kids because 10 child dancers come out from under the gigantic skirt of Mother Ginger, according to a UBC press release.

To Friday: The Korean language version of “The Snowman,” a musical based on the children’s book of the same name by English author Raymond Briggs, returns for an encore performance after its premiere here in March 2009. The musical is a classic tale about the adventures of a boy and his snowman. Created in 1986 in London, the musical has been a popular holiday favorite ever since.

To Jan. 30: The legendary story of the three musketeers Athos, Porthos and Aramis returns to Korea, following sold-out houses the last time it was presented here.

To March 31: The first Korean-language performance of “Jekyll and Hyde” was in 2004, and this musical has been a favorite with Korean audiences ever since.

Jekyll and Hyde is set in London in 1885. Henry Jekyll is a doctor and scientist who lives with his sick father and decides to devote his life to finding a cure for his mental illness. He ultimately decides to experiment on himself, which is when he starts to form his frightening other half - Hyde.

Friday: Singers who have been designated national treasures will perform in “Ahn Sook-sun’s Song of the Underwater Palace in the Tradition of Jeong Gwangsu,” which is part of this celebrated full-length Pansori Singing series.