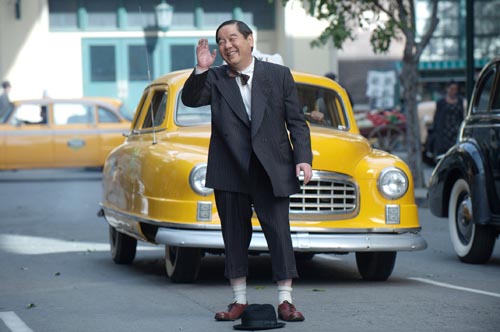 
He’s got black stains on his front teeth, a big mole beside his red nose, and he wears grubby, baggy pants pulled up to his chest. When his friends call his name, Younggu, the dim-witted country bumpkin, pokes his head out his window, flashes a toothy grin and shouts, “Younggu Eo-o-op-da!” - Younggu is not here.

In this famous role on a popular comedy show, actor Shim Hyung-rae brought wild laughter to young Korean audiences in the 1980s and early 1990s with his ludicrous charm.

After serving as a fixture in Korea’s comedy scene and as a children’s hero, Shim then went into filmmaking and even joined hands with Hollywood. But many of his now grown-up fans were disappointed when his 2007 fantasy flick “D-War” ended up being little more than a CG spectacle starring a Western cast.

But once again, Shim has reinvented himself - by revisiting his old trademark character.

“The Last Godfather,” Shim’s second Hollywood-made venture, is a kind of parody of Francis Ford Coppola’s “The Godfather” (1972). In the film, he revives Younggu as the heir of an Italian mob boss (played by Harvey Keitel of Quentin Tarantino’s “Reservoir Dogs” and “Pulp Fiction”) in New York in the 1950s.

One might wonder how the peculiar transnational-period setting will turn out, but surprisingly it works quite well. Shim delivers his vintage slapstick comedy - suffocating enemies with the odor of his stinky feet or repeatedly missing his target to have his weapon land on his own head - while conversational Western actors weave the story and occasionally offer their own brand of comedy.

It’s time for the aged mafia boss Don Carini (Keitel) to name his heir, and he suddenly introduces his hidden son, Younggu, out of nowhere.

Younggu, born to a Korean woman who Carini met during a trip to Korea, was raised in an orphanage run by American nuns after his mother died shielding her husband from bullets. Out of guilt for failing to be a proper father to Younggu, Carini sets out to train his “special” child as his successor. His loyal underlings (Michael Rispoli and John Pinette) agree to assist him, albeit with a bit of jealousy.

The cinematic conceit is that Younggu happens to bump into Nancy (Jocelin Donahue), the daughter of the Carinis’ sworn enemy, Bonfante, and they fall in love like Romeo and Juliet. Meanwhile, the two mob families are in a turf war, and the unlikely love story between Younggu and Nancy makes their confrontation all the more complex.

To please his father, Younggu, certainly not cut out for this line of work, put the screws on the street vendors to squeeze money out of them but ends up becoming a heroic figure who brings everyone joy.

Believing that Younggu is foiling his ambitions, Vinnie (Jason Mewes), the would-be heir of the Bonfantes, plots to get rid of him.

Shim makes an amusing comeback in “The Last Godfather,” delivering his freewheeling humor despite the sometimes awkward and distressed look of his aged face.

“The Last Godfather” was written, directed and produced by Shim and includes the work of cinematographer Mark Irwin and editor Jeff Freeman. The film, rated 12, was released in Korea yesterday.