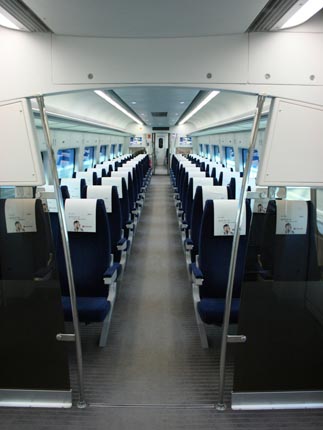 The interior of an express AREX train to Incheon International Airport yesterday. By Allen Wagner

There were no mile-long queues or busy platforms at yesterday’s opening of the fully completed AREX, the airport express that links Seoul Station and Incheon International Airport. And though there were some teething problems, passengers said they found the trains and service impressive and comfortable.

In a newly constructed annex at the west end of Seoul Station, passengers flying Korean Air, Asiana Airlines or Jeju Air were able to check in to their flights and go through immigration before getting on the train seven floors down.

But things were relatively quiet at the check-in counter in the morning hours yesterday.

“We’ve had roughly 30 people check in their bags, and we expect more throughout the day,” said a Korean Air employee who was working the check-in desk around 8:40 a.m., a little more than three hours after the station opened at 5:20 a.m.

Passing through immigration makes passengers’ trips quicker and easier, said Kim Jeong-hwan, an official of Korail Airport Railroad Co., the operator of the newly finished line. Those who go through immigration at Seoul Station are allowed to pass through a specially marked section - without having to stand in line - after going through airport security.

The Ministry of Land, Transport and Maritime Affairs had been waiting for approval from the Ministry of Justice to open an immigration line at Seoul Station, and only received official confirmation two nights ago - the night before the service to Incheon began. There had been some doubt from the Land, Transport and Maritime Affairs Ministry that they would get approval before the first day.

After bags are checked, passengers can either take the express or commuter line.

The express line goes directly from Seoul Station to Incheon International Airport, or vice versa, in 43 minutes, at an average speed of 100 kilometers per hour (62 miles per hour).

The other option for travelers is the commuter line, which makes seven stops - not including the Seoul Station and Incheon Airport terminals - and takes 53 minutes. Gongdeok Station will be opened in late 2011, which will bring the number of total stops to eight.

Getting tickets for the express train can be tricky for foreigners, because the tickets, which resemble credit cards, are bought at an information desk that doubles as a ticket booth next to the ticket gates. There are currently no English signs indicating where tickets can be bought.

“There are some points lacking because it is just the first day, but we are making improvements,” said Ahn Hye-young, an employee at the information desk.

Passengers who opt to get on the commuter line can use their T-money transportation cards.

Tickets for both the express and commuter lines can also be acquired at automated machines that take cash only. The machines, some of which were not yet operating, were scattered throughout the station and have Korean, English, Japanese and Chinese interfaces.

The express train, which leaves every 30 minutes and is four seats across, was quiet with just a handful of passengers yesterday morning. An attendant came by after the train departed to check that riders had tickets.

Free wireless internet is available on the express line for those who have access to Korean service providers SKT or KT.

There are LCD screens inside the cars that provide flight arrival and departure information, as well as local and international news and world weather information.

The commuter line is much like the Seoul subway, with seats facing each other against the car’s walls.

Passengers who are hungry can stop by at a convenience store after getting off at Incheon Airport, next to the station’s exit gates. Vending machines can also be found on station platforms.

Upon arrival at Incheon, inclined, moving walkways bring passengers to the floor below the airport departure area in about five minutes, and you don’t need to brave the elements outside. An escalator completes the trip to the departure area. The trickle of passengers from the early morning hours steadily grew into a stream towards the afternoon and many found the ride quiet and efficient.

“It was pleasant and we will use it again,” said Ji Bong-geun, 43, who went to the airport for a trip to China with his wife, son and daughter.

“I was planning on taking a car and parking it at the airport, but I heard of this the day before and decided otherwise,” Ji added. “It was much better than taking the car because of the snow and current road conditions.” Ji’s wife complimented the cleanliness of the train.

Erin Smith, 22, also found the trip good, though getting on the train was a little troublesome.

“So far it’s been good, but I think more signage is needed,” said the English teacher, who was headed to Beijing.

“But the people [at the station] were helpful because they came up to me to help when I looked pretty lost.”

For those like Smith, numerous workers have been positioned all over Seoul Station as well as at Incheon International Airport to assist AREX passengers through Jan. 5.