School lunch program down to wire

School lunch program down to wire 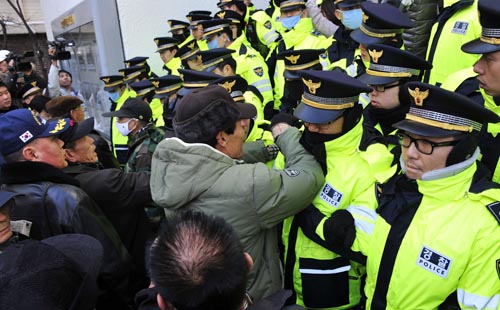 Members of the conservative Korea Parent Association confront riot police outside the Seoul Metropolitan Council during a rally against the free-school-meal program. [NEWSIS]


The Seoul Metropolitan Council, controlled by the liberal Democratic Party, filed a complaint yesterday against Seoul Mayor Oh Se-hoon for neglect of duty after DP and Grand National Party councilors failed to narrow differences over whether next year’s budget bill will include money for free lunches at elementary schools.

Seventy seven of 79 DP councilors signed the complaint and it was submitted to the Seoul Central District Prosecutors’ Office yesterday morning. DP councilors argued Oh violated a law governing autonomous government that requires a mayor or governor to attend and answer the council’s questions.

Mayor Oh has been refusing a request by the Seoul Metropolitan Council to appear at the council’s question-and-answer session to protest the DP’s railroading of a free-school-meal bill on Dec. 1. The council also held an all-night, secret session on the morning of Dec. 23 in which it earmarked 69.5 billion won ($60.8 million) for the meal program without consulting the mayor or ruling party council members.

Oh had requested the council re-examine the lunch budget, and Seoul councilors were scheduled to vote on it again yesterday, in addition to passing the entire Seoul city budget for next year. The GNP said it would boycott the budget bill until the Seoul city government and DP hammer out a settlement on lunches.

Some 100 members of the conservative Korea Parent Association protested against the lunch program at the council and were blocked by police from entering the main hall. Thirty members scuffled with council officials. Lee Jong-hyun, a spokesman for the Seoul Metropolitan Government, blasted the DP’s complaint again Oh.

“It’s very regrettable we reached a situation like this while a negotiation channel between the two sides is still open,” Lee said.