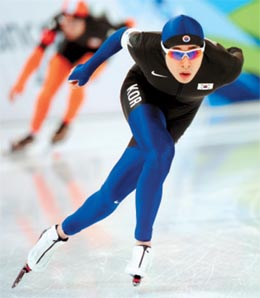 Korean Lee Seung-hoon won his second straight title at the Asian Allround Championships and qualified for the speed skating world championships next year.

On Tuesday, Lee won the 5,000 meter race and finished second in the 500 to assume the overall lead.

Lee won the gold medal in the 10,000 at the Vancouver Winter Olympics earlier this year and grabbed silver in the 5,000.

The converted short-track skater is the first Asian to win an Olympic gold in a long-distance event.

The win at Harbin qualified Lee for the ISU World Allround Speed Skating Championships in Calgary, Canada, which will take place from Feb. 11-13.

Lee also qualified for the World Championships in Heerenveen, the Netherlands, in March, but did not enter the event because he was taking time off after the Vancouver Olympics.

Lee also said in numerous interviews this year that he was still interested in competing in both the short-track and long-track speed skating events.

Before the Calgary event, Lee will race at the Jan. 30-Feb. 6 Asian Winter Games in Astana, Kazakhstan.