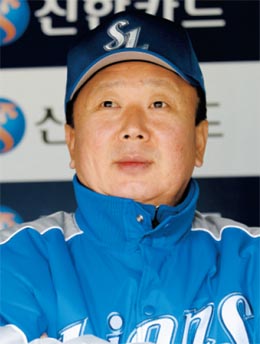 Despite finishing second in the league in 2010, the Daegu Samsung Lions continued a major overhaul of their front office yesterday by parting ways with iconic Manager Seon Dong-ryeol. The two-time Korean Series winning manager resigned to make room for assistant coach Ryu Joong-il.

According to the Lions, Seon stepped down from his post after the team decided to “move in a different direction.”

The move to replace Seon comes after the team’s president and general manager were fired earlier this month. Seon is expected to stay on with the Lions in an advisory role.

“With the team and league’s 30th anniversary coming up next season, we wanted to start anew with some changes,” said a Lions official. “As such, we have decided to replace our manager.”

Seon’s resignation is seen as a surprise by many, considering the 49-year-old had signed the biggest-ever contract for a KBO manager in September. The Lions rewarded Seon with a five-year deal worth 2.7 billion won ($2.26 million).

“I’m stepping down as manager for the sake of the Lions and the new direction they’re headed in,” said Seon. “I hope the club can emerge as a new team with a younger lineup.”

Seon first signed on with the Lions back in 2004 for what was then the largest contract for a KBO manager. The five-year deal was worth 1.5 billion won. Seon led his club to back-to-back Korean Series wins in his first two campaigns in 2005 and 2006. This year the Lions were swept in the Korean Series by the Incheon SK Wyverns.

Seon’s Lions missed the postseason only once - in 2009, when they finished a close fifth behind the Lotte Giants.

The new manager, Ryu, is a former Lions shortstop, has been assistant coach with the team since 2000 and was an assistant coach on the national team during its gold-medal win at the 2010 Guangzhou Asian Games.

Selected second overall in the 1987 Amateur Draft, Ryu produced immediately for the Lions in his rookie season. He hit .311 and played solid defense to earn the Golden Glove award in 1991, establishing himself as one of the premier shortstops in the league until his retirement in 1999.

“I will try my best to live up to the expectations of the club,” said Ryu. “I will lead the club with the goal of molding the team into one that’s spirited, team-oriented and popular with the fans.”