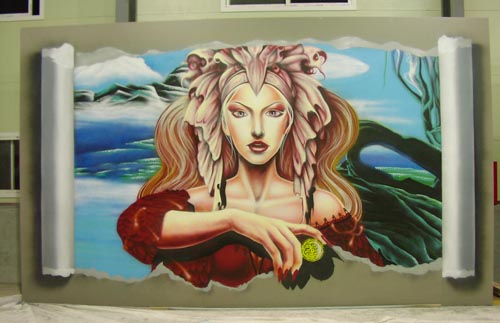 Visitors passing by a Mona Lisa painting inside aT Center in southern Seoul crack up as soon as they notice that something’s wrong. Although the lady sits with her famously ambiguous smile, her cheeks are inflated to around three times their normal size. Attached to her face is a pump, and next to the portrait is a sign that reads, “maybe she needed a little botox.”

Parodies of historic paintings, larger-than-life figures from Greek mythology and graffiti art are all featured in the new “Miracle Art” exhibition in Yangjae-dong, which continues until March 1, providing a fun, interactive art venue.

“Classic genres of art have become so inaccessible these days, especially to children, who are faced with a flood of online games and Internet media,” said Hur Seong-hun, CEO of Keritage, who organized the exhibition in conjunction with broadcaster SBS.

“We wanted to hold an exhibition that introduces historic paintings and legends in an enjoyable way that doesn’t alienate modern viewers.”

In the “parody art zone,” one of the exhibition’s six sections, well-known paintings are recreated using the trompe l’oeil technique, which uses optical illusion to make objects appear three-dimensional.

According to the organizers, the 40 participating artists collaborated with one another in various combinations to make the paintings and installations in the exhibition. In a parody of Dutch painter Johannes Vermeer’s “Girl with a Pearl Earring,” the tail end of the girl’s turban has been unwrapped and lifted so that it emerges outside the frame. In a parody of “The Scream,” Norwegian painter Edvard Munch’s best-known work, a loudspeaker placed next to the frame seems to be what gets the figure in the canvas screaming.

Visitors are welcome to step inside cut-outs of some of the larger-than-life trompe l’oeil paintings to become part of the original work. 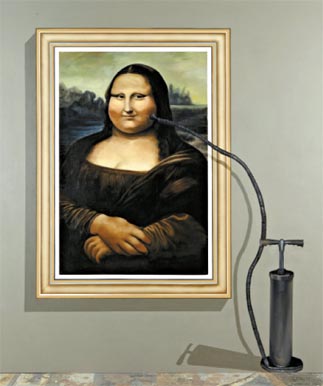 A parody of Greek goddess Athena by Nimbolt, top, and a parody of the Mona Lisa, which has a pump to inflate her cheeks and a sign that says “maybe she needed some botox.” Both pieces are part of the “Miracle Art” exhibit at aT Center in Yangjae-dong. Provided by Keritage

In the “Greek mythology zone,” 20 large paintings, some of which stand 9 meters (29.5 feet) tall, are displayed in chronological order to tell a fictional story involving Greek gods and goddesses including Zeus and Athena. Viewers are encouraged to recreate the narrative by taking their own photos and then rearranging them. The Greek mythology series was painted by Nimbolt, a graffiti artist from Korea.

“Instead of just looking at a painting, visitors can participate in the storytelling process,” he said. “It’s a fantasy and I think it can get people, especially children, interested in classic Greek mythology.”

The “funny experience zone” recreates actual spaces such as Vincent van Gogh’s room, which allows visitors to sit on the bed and take pictures. Next to van Gogh’s room stands a re-creation of the famous red room in French artist Henri Matisse’s “The Dessert: Harmony in Red.”

“I want this exhibition to be a light-hearted yet educational experience for children and adults alike,” said Hur.