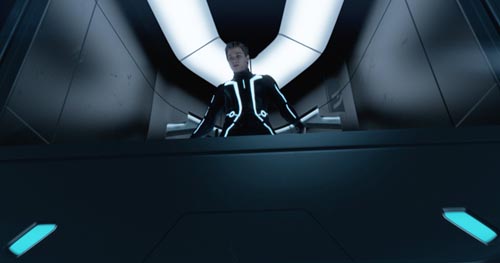 A screen shot from “Tron: Legacy,” released in Korea on Wednesday. Provided by Disney


LOS ANGELES - Jeff Bridges insists he’s lazy at heart - but the grizzled Oscar-winning actor has thrown all his energy into helping revive the cult 1980s sci-fi movie “Tron” for the 3-D generation.

The 61-year-old, who has had a fantastic comeback year after winning Best Actor for his role in “Crazy Heart” at the Academy Awards, reprises his character Kevin Flynn in “Tron: Legacy,” due out this week.

In it he does the neat trick of appearing opposite a computer-generated version of his younger self from the 1982 original.

“It was very odd,” Bridges says. “It wasn’t actually me, it was a rendition created by some wonderful artists and the rendition was a version of me from 25-30 years ago.”

Explaining why he agreed to do the movie, he tells reporters: “It was basically the same reason that I did the first one: it was cutting-edge technology at that time, and this one certainly is for this time.

“Twenty seven years ago Tron was a truly avant-garde film. Of course now, looking back, [it] looks like an old television series in black and white.”

The original “Tron” - about a hacker transported into a computer-game world - was one of the first-ever animated films. It did well at the box office and became a cult classic for a generation of budding sci-fi fans.

The updated version, set to the beats of French electro-house duo Daft Punk, reprises the story, except with Flynn’s son entering the virtual “Tron” computer game world to be reunited with his father.

“It’s a complicated story, because we’re building off a story that was done in 1982, and we’re creating 28 years of intermediate story, and then starting our movie in 2010,” director Joseph Kosinski told AFP.

Progress in film animation made the film more complicated, said the 36-year-old filmmaker, who has a background in design and architecture, and has won awards for commercials for Xbox 360 and Playstation 3 games.

“It’s one of those movies that just takes a long time to make,” he says, noting that while the original took nine months in post-production, the new “Tron” has taken 18 months.

Bridges - who also stars in the Coen brothers’ latest movie, “True Grit,” released a week after “Tron” - is philosophical about his recent success crowning a 40-year career.

“I’m a pretty lazy guy. I spend most of my time avoiding work. Honestly, I do my best to turn everything down,” he says. “My priority is my family, my sweet wife.”

But he admits: “It was a great year, of course, and I am very grateful for this.”

“Tron: Legacy” was released in Korea on Wednesday.