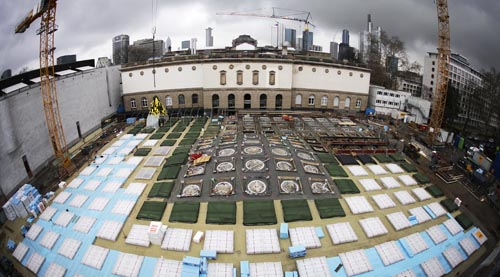 The Stadel Museum’s underground expansion will be completed in the fall of 2011. By Martin Oeser


FRANKFURT - A series of museums along Frankfurt’s Main River is the equivalent to Manhattan’s famed museum mile, making the German city perhaps one of the most underappreciated places for art in the world.

The Stadel Museum is one of Germany’s oldest art museums. Its history goes back to 1815, when local merchant and banker Johann Friedrich Stadel bequeathed his art collection and fortune to the foundation of “a special, autonomous art institute bearing [his] name to provide the best for this town and its citizens,” a museum representative said, quoting his will.

Upholding Stadel’s wish, the foundation opened Stadelschule, which is a public museum and art school, as well as the Stadel Museum. Since its opening, the Stadel has broadened its collection and educates young artists from around the world.

The Stadel is currently undergoing an ambitious expansion, following the wishes of the late founder.

The art museum launched a competition for the design of a new wing in September 2007. The following February, the Frankfurt-based architects schneider+schumacher were awarded the project for a unique plan to build a 3,000-square meter (32,200-square foot) exhibition hall underneath the museum’s garden.

“We just had a ceremony to cover the roof of the extension space a few days ago [in November],” said Axel Braun, who is with the museum’s press and public relations office.

“The walk-on [roof] is covered with snow now, but it will soon be covered with grass and the museum will also get the trees back in the garden. We will display sculptures and it will be an outdoor space for contemplation,” he added.

The new wing will allow the museum to display many new additions to its collection. 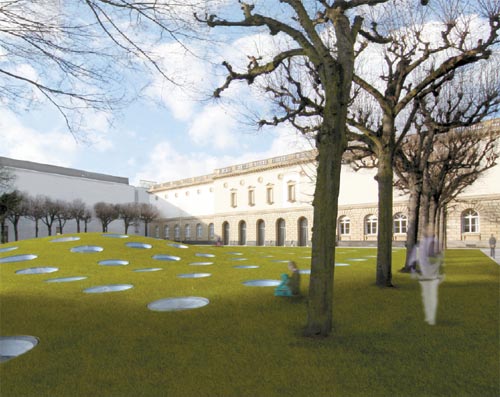 A rendering of a rooftop garden above the underground expansion. Provided by the museum


The year 2008 was a prosperous year for the museum, as it succeeded in adding about 850 post-1945 works to strengthen its contemporary holdings.

More than 200 original works were provided by the DZ Bank Art Collection of Contemporary Photography in March 2008. Seven months later, Deutsche Bank transferred 600 paintings and sculptures to the museum.

“I am so excited because we will have so much to offer and so much to show in this new space,” Braun said as he looked over the snow-covered rooftop of the new subterranean gallery from the window of what he called the “secret mission room.” In that small room, a white model of the new gallery is placed on top of a table, along with many cutout copies of scaled-down masterpieces.

“Curators play with the walls, lights and pictures here,” he said. “This is a big secret, and you will all see everything once the new space opens up.”

The underground gallery that will house the collection of post-1945 art is scheduled to open in the fall of 2011, and Braun said everything - both construction and fund raising - is on schedule.

The extension will cost about 30 million euros ($39 million).

“And thanks to many generous donors, companies, foundations, public authorities and patrons, the New Stadel project is on track,” the public relations officer added. 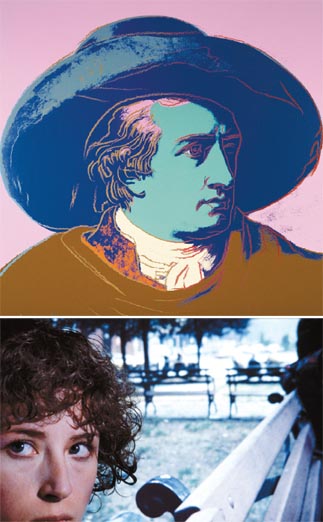 The museum has secured about 80 percent of the necessary funding, much of it through a massive fund raising campaign.

The museum also launched the Friends of the Stadel Museum program to encourage the public to participate in the expansion.

During the construction period, some of the museum’s masterpieces are traveling abroad in an exhibition entitled “The Golden Age of Dutch and Flemish Painting from the Stadel Museum.”

The exhibition is at Spain’s Guggenheim Museum Bilbao through Jan. 23 before moving to Japan’s Bunkamura Museum of Art from March 3 to May 22. Jan Vermeer’s “The Geographer” and other masterpieces by Rembrandt van Rijn and Peter Paul Rubens are highlights of the exhibition.

Meanwhile, the Stadel in Frankfurt has put together a delightful exhibition with a clever idea. Titled “In Chronological Order,” the exhibition features artworks from the 14th to 21st centuries from the museum’s collection.

“It is a unique exhibition in a sense because these paintings have never been displayed in chronological order,” said Albrecht Wild, one of the museum’s graphic artists.

Wild led the Korea JoongAng Daily on a private Monday tour as most museums in the city were closed for the day.

About 300 paintings by artists such as Jan van Eyck and Gerhard Richter are displayed in 12 rooms. A timeline of historical events contemporary to each painting is displayed above the works, giving viewers a sense of what was happening in the world when the artist was working on the piece.

The highlight of the exhibition is Rembrandt’s “The Blinding of Samson.” The sensitive condition of the painting did not allow the masterpiece to join the overseas exhibition in Spain. 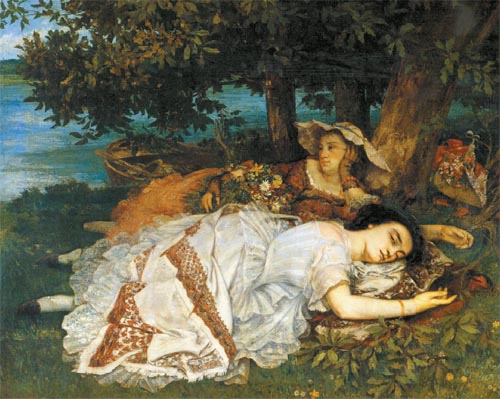 Courbet’s “Young Ladies on the Banks of the Seine, Summer,” is displayed at the Schirn. Provided by the institutions.

The next destination was the Schirn, another hidden treasure chest of art in Frankfurt.

Located on the corner of the city’s Christmas market, the gallery is situated in an astonishing Grunderzeit-style building. The current main exhibition is “Courbet: A Dream of Modern Art,” featuring French painter Gustave Courbet.

In the gallery, Courbet’s masterpieces from around the world are hung on crimson-colored walls.

The gallery presents a series of portraits of a young woman dreaming. Different from his style of realism, the dreamy paintings allow viewers to think about a different Courbet. The new perspective allows art lovers to search for more poetic meanings in the artist’s other realist portraits, landscapes and seascapes.

One of the highlights of the special exhibition is his three “Wave” pictures. A powerful feeling of loneliness is captured in the paintings.

The exhibition runs until Jan. 30. The museum notes that it is the first comprehensive exhibition dedicated to the painter in Germany in more than 30 years.

In addition to the classical masterpieces featured at the two museums, Museum fur Moderne Kunst Frankfurt am Main - often called MMK - is the perfect place for those seeking a more contemporary experience. Its amazing exhibition “Not in Fashion” runs until Jan. 9.

It features iconic models and behind-the-scenes images of the fashion industry in the 1990s, along with familiar prints of glamorous ad campaigns from fashion powerhouses of the time.

It was a rare treat to walk along the maze of gigantic ad campaign prints. And it was interesting to see rarely-viewed photos of a Helmut Lang show by Juergen Teller.

This is definitely a show for anyone interested in fashion.

Frankfurt still has many other galleries and museums to visit. About 40 museums and art galleries are located here.