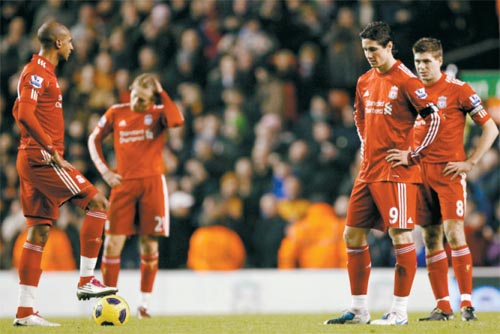 
LIVERPOOL, England - Home supporters turned on manager Roy Hodgson as Liverpool hit rock-bottom with a 1-0 defeat to the relegation-threatened Wolverhampton Wanderers at Anfield here on Wednesday.

Stephen Ward’s 56th minute goal earned the last-place Wolves their first win at the famous venue in 26 years as the Reds ended a miserable 2010 on the back of three defeats in four games.

Angry fans taunted Hodgson, who only took over from Rafa Benitez in pre-season, with mocking taunts of “Hodgson for England” after the former Fulham boss replaced David Ngog with Ryan Babel as the game slipped away.

“I am getting used to it,” said Hodgson as he tried to explain the root of the fans’ displeasure toward him. “That’s the way it is. [Dalglish] was a rival for the job, but the job was given to me and he is a Liverpool legend.”

“It’s the Kop’s way of showing they are not happy with the way the team is playing. As manager, you have to accept responsibility for that and take it on the chin.”

A home match against the league’s basement club was supposed to present Liverpool with an ideal opportunity to sign off the calendar year with a victory that would offer their followers a glimmer of hope to take into 2011.

Having lost six of their previous eight Premier League games, the Wolves should have been there for the taking. They hadn’t won away from home in nine months, yet Mick McCarthy’s men thoroughly deserved the three points.

Now, the end of 2010 cannot come soon enough at Anfield.

Since Fernando Torres scored a last-minute winner at Aston Villa to ensure Benitez’s Liverpool started 2010 in seventh, there has been little for fans to cheer about.

Even a change of manager has failed to halt the slump in fortunes, with Liverpool suffering costly defeats by Blackpool, Stoke and Newcastle in the first few months of Hodgson’s reign. But this loss will go down as the most embarrassing of the lot.

Arsenal manager Arsene Wenger also came under fire for his selection policy after his side conceded a late goal in a 2-2 draw against 10-men Wigan, which could prove costly in the race for the Premier League title.

An early Ben Watson penalty gave Wigan the lead before Andrey Arshavin and Nicklas Bendtner both scored just before halftime, to give visitors Arsenal the advantage at DW Stadium on Wednesday.

However, just three minutes after Charles N’Zogbia’s sending-off for a headbutt on Arsenal’s Jack Wilshere, Sebastien Squillaci headed-in his own goal following pressure at a corner.

Wenger is likely to come under fire from Gunners fans who saw him make eight changes from the side that beat champions Chelsea 3-1 on Monday.

Only Lukasz Fabianski, Bacary Sagna and Laurent Koscielny survived from that encounter, with Wenger clearly having one eye on the congested fixture list over the festive period and into 2011.

“There is no rule,” he said after a draw that left Arsenal in third spot, two points behind leaders Manchester United and second-place Manchester City.

“We had the disadvantage that Wigan played three days ago and we played 48 hours ago. I had to change because we play again on Saturday and again next Wednesday and then next Saturday, and we cannot always play with the same team.”

Despite all those changes, Arsenal should have had the depth to beat a Wigan side currently haunted by relegation.

But although they came from behind to lead 2-1, Arsenal could never quite shake Wigan off and the home team thoroughly deserved the point that lifted them out of the bottom three.

“Yes, [I’m disappointed] because we were 2-1 up and played against 10 men and dropped two points,” Wenger said. “It was a difficult game with a high level of commitment from Wigan, and they caught us a bit at the start.